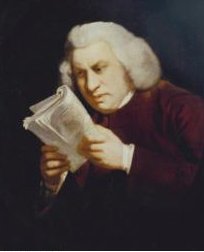 Did you catch any of the Scripps Spelling Bee last night? If you did, you might be feeling that your vocabulary is sorely lacking, let alone your spelling abilities. A 13-year-old won with Laodicean, meaning lukewarm to religion. Try using that one in a sentence this week.

One guy who might have enjoyed the challenge of a spelling bee was Samuel Johnson. He spent nine years writing the first dictionary of the English language, which contained 43,000 words. The title certainly doesn’t skimp on words: “A Dictionary of the English Language: in Which the Words Are Deduced From Their Originals, and Illustrated in Their Different Significations by Examples From the Best Writers.”

Published in 1755 in two volumes, it contained 116,000 quotations from such luminaries as Shakespeare and Milton to illustrate those 43,00o defined words. It’s certainly a monumental achievement by this 18th-century writer who also published poems, essays, biographies, and letters. You may remember from your school days that Johnson’s life was chronicled by James Boswell in “The Life of Samuel Johnson.” Only Shakespeare and the Bible are quoted more often than Johnson, and that’s why the Huntington Library is honoring the 300th anniversary of his birth with an exhibit, “Samuel Johnson: Literary Giant of the 18th Century.”

On display are books, manuscripts, letters, and the famous portrait, “Blinking Sam,” painted by Sir Joshua Reynolds in 1775. There are two volumes of the dictionary on exhibit. The massive tomes look like tree trunks from the side, the pages are thick and wrinkly and resemble tree bark. Looking at them is like beholding a bible. After all, Johnson’s work was the authority until the 20th century and all other dictionaries are based on it.

The Huntington has a volume opened to the definition of lexicographer, wherein Johnson was essentially defining himself:

LEXICOGRAPHER: A writer of dictionaries; a harmless drudge, that busies himself in tracing the original, and detailing the signification of words.

The exhibit opened May 23 and runs through Sept. 21. While you’re there, take the time to browse the other treasures of American and British history and literature in the library, including works by Shakespeare, Chaucer, and Audubon, as well as a Gutenberg Bible.