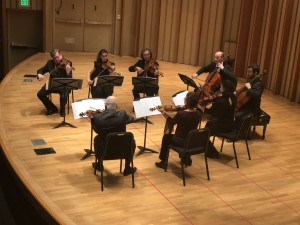 A chill breeze set in late Sunday afternoon in Downtown Los Angeles, wafting through the skyscrapers, and setting trees swaying with a rustling that was a harbinger of the winter that will arrive in a matter of days. Its bite was already felt at the tips of one’s fingers, in the hollow of one’s cheeks. So what a relief to duck into the Colburn School of Music’s Zipper Hall as the sun silently vanished over the horizon, where Dilijan Chamber Music presented a program and music-making that greeted the audience like the welcoming glow of a warm hearth.

Dilijan distinguishes itself not only for the excellence of its players, but also for its exploration of Armenia’s rich contribution to classical music, as well as its intelligently assembled programs. Last Sunday was no different, with a first half that delineated the contrasts and complex web of mutual influences that criss-crossed the artistic paths of Mieczysław Weinberg, Aram Khachaturian and Dmitri Shostakovich.

Weinberg, the youngest of the three, has seen his reputation climb in recent years, a phenomenon that began shortly before the composer died in semi-obscurity in 1996. Listening to his 1942 Aria for string quartet, Op. 9 which opened the program, one is tempted to dismiss him as a Shostakovich epigone who modeled his score much too obviously on the slow movements of the elder composer’s Second and Fourth String Quartets — until one realizes that Weinberg’s work was penned years before either. The student, as it turned out, exercised a considerable influence on the master. In this youthful work one can already hear not only the stirrings of his own original voice, but also the foreshadowings of tendencies which Shostakovich would later absorb into his own art and make his own. The performance by Movses Pogossian (first violin), Martin Beaver (second violin), Paul Coletti (viola) and Clive Greensmith (cello) sweetly daubed the corners of the music, playing up its dewiness without sacrificing control.

Those seeds intimated in the Weinberg would be tellingly demonstrated 22 years later in the older composer’s Tenth String Quartet, with Shostakovich now returning the favor to Weinberg by way of a dedication: a rare tribute as much a mark of respect for the younger man’s craft as it was for his friendship.

Shostakovich’s quartet is a transitional one, looking back to the neo-Mussorgskian style that marked many of his works from the 1950s and early 1960s, as well as forward to the austerity of his late music. In some respects it is a wayward curiosity, more interesting for what it portends rather than for its intrinsic qualities. Nonetheless, the quartet composed of Varty Manouelian (first violin), Eva Aronian (second violin), Cara Pogossian (viola) and Edvard Pogossian (cello) made an eloquent case for this poker-faced opus, playing it straight and letting the listeners decide for themselves whether the wan face it presents is a smirk or a frown.

Shostakovich’s influence, in turn, can be discerned in the work by another close friend and musical colleague, Khachaturian’s late Sonata-Monologue for solo violin, part of a cycle of works he composed in his final years. The declamatory power and occasional tapping on the lower bout of the instrument tip the hat to Shostakovich, but the bardic lyricism at the heart of the music is pure Khachaturian. Making her debut with Dilijan, as well as performing the score’s Los Angeles premiere, was violinist Eva Aronian whose performance was a veritable how-to in balancing emotional weight and technical virtuosity. She boldly cut her way through this melancholy, sometimes despairing music, while simultaneously illuminating the textures with utmost fidelity, conveying the music’s power with a persuasiveness matched by few and surpassed by none.

The second half of the program reunited all the players in a spirited burst through the original version of Felix Mendelssohn’s Octet for strings. For those only familiar with the much better known revised version of this eternally fresh score, a few surprises lay in store. But what was no surprise was the precision, color and joyous swing of this Dilijan performance. It was of a piece with the atmosphere this chamber series typically cultivates.

The barriers usually confining composer, musicians and audiences into separate spaces are dissolved at Dilijan. Instead, they are all threaded together in an atmosphere both inviting and familial that leaves one feeling, as nowhere else, that the realm of great music is everyone’s home.