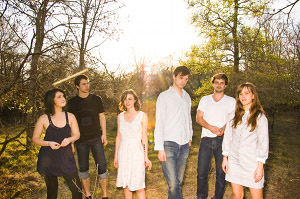 When David Longstreth heard his music Saturday night (Feb. 27) at Walt Disney Concert Hall, his body reacted.  Deft toe tapping and a kind of rhythmic saunter embodied the swells and trills of The Getty Address, played in its entirety with the small orchestra of Alarm Will Sound.  The operatic and genre-dissolving 2005 album would serve as an oeuvre all by itself if Dirty Projectors, Longstreth’s Brooklyn-based ensemble, had ceased music-making that year.  (They didn’t, and 2009’s Bitte Orca reached the top tier of album reviews for publications like Pitchfork Media and TIME.)

The concert began with four pieces of music by the LA Philharmonic under the baton of Diego Matheuz, who, like LA Phil Music Director Gustavo Dudamel, studied in Venezuela’s El Sistema.  John Orfe performed two Ligeti etudes as if the piano were an extension of himself; between the etudes, an orchestral Wagner prelude from Tristan und Isolde hinted at the foreboding and resolution of Getty. Maurice Ravel’s Mother Goose Suite closed the first segment of the concert, and its adoption of various styles and attitudes into a coherent whole unlatched the mental gates that keep music in categories.

The Getty Address poured out soon after from baroque, opera, folk, epic poetry, and some new, strange, effective vocal style that involves vowels with one’s tongue out.  With Alan Pierson conducting the sizeable ensemble of Dirty Projectors and Alarm Will Sound, the sonic variety and mind-bending percussive precision of the album came to life.  A trio of vocalists — Amber Coffman, Angel Deradoorian, and Haley Dekle in red, blue and yellow cloaks — struck complex harmonies with almost unsettling ease.  Deradoorian, in red, simultaneously managed a keyboard and computer.  Brian McOmber and Nat Baldwin provided heart-fluttering drums and bass.  Longstreth’s eyes darted from conductor to ensemble, from the trio’s rhythmic swaying to his own guitars; throughout, a live connection to the music kept him engaged almost to distraction.  As Alarm Will Sound colored in the landscape of The Getty Address, the captivated audience of young and old, American Apparel and Brooks Brothers, was energized and reverent, seeming to float away with the strings and jump to life with McOmber’s sudden entrances.

Pierson, it should be noted, conducted a wide-ranging and stylistically unprecedented group with ease.  The journey of Getty’s fictional protagonist Don Henley – “based more on my brother Jake, Hernán Cortes and also Stephen Dedalus from… Portrait of the Artist as a Young Man” than on the Eagle frontman himself, says Longstreth – takes route through sleepy strings and driving rhythms, with vocals as unpredictable as they are perfectly suited to the concept.  “Ponds and Puddles,” mid-Getty, brings to mind the rock opera; “Finches’ Song at Oceanic Parking Lot,” which ends the journey, warbles its way past any such simple categorization.

Even in the recent evolution of cross-generic pastiche across the fine arts, Saturday night was a feat.  Longstreth’s work in Getty is a patchwork without seams.  Dirty Projectors, Alarm Will Sound, and the inimitable Alan Pierson filled the potential of genre defiance to its greatest capacity.  Furthermore, the already coherent work in Getty seemed all the more unified under a baton.

After multiple standing ovations from the packed hall, Dirty Projectors returned to the stage for a kind of chaser, calm selections from Bitte Orca.  Songs from the equally engaging if far less conceptual album served to showcase the band by itself.  The trio of women from Getty’s “chorus” continued to strike remarkable chords, McOmber and Baldwin filled in the counterintuitive rhythm, and Longstreth carried on his tiny dance of mini-conducting.