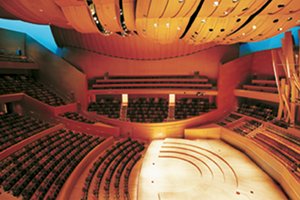 The very last pizzicato note of “Petrushka” in a February concert conducted by Charles Dutoit was overshadowed by someone’s badly timed cough. Therefore, I decided it’s time to publish a set of rules of etiquette for Disney Hall that have been sitting on my computer for several months now.

But, first, here are the March highlights of upcoming concerts featuring renowned guest conductors and soloists.

March comes in like a lion, beginning on Thursday, March 4, with a series of Prokofiev concerts conducted by James Conlon with pianist Lise de la Salle. The program includes the Symphony No. 1 “The Classical,” the Piano Concerto No. 1, and the Suite from “Romeo and Juliet.” The program repeats on Saturday and Sunday, March 6 and 7.

Next on the calendar is a series of concerts directed by the Dutch conductor, Edo de Waart, who will lead the orchestra in two works, Beethoven’s Piano Concerto No. 3, with the young Korean pianist Joyce Yang as soloist, and the Herculean “Ein Heldenleben” by Richard Strauss. The programs runs Friday through Sunday, March 12-14.

Thursday through Saturday, March 18-20, German pianist Lars Vogt, will perform the Grieg Piano Concerto with the orchestra under the direction of Robin Ticciati. Other works on the program include the “King Kristian Suite” by Sibelius and the Enigma Variations by Edward Elgar. Vogt also performs a chamber music recital with members of the LA Phil on Tuesday, March 16, with works by Ravel and Elgar.

Then pianist and frequent Disney Hall visitor Emanuel Ax has a series of performances for a week, beginning on Tuesday, March 23, when he will perform a recital with famed soprano, and also frequent Disney Hall visitor, Dawn Upshaw. Ax will then join the young conductor, Lionel Bringuier, in the Piano Concerto No. 2 by Chopin Thursday through Saturday, March 25-27. The other major work on the program is the Shostakovich Symphony No. 6. Ax finishes out the week on Tuesday, March 30, when he joins members of the LA Phil in a recital of works by Janácek, Brahms, and Schumann.

It doesn’t matter how many musicians are onstage at Disney Hall, one person unwrapping a cough drop or flipping through a program can be completely distracting. Those sensitive acoustics that pick up every note onstage unfortunately also carry one person’s throat clearing to the entire audience’s ears. Disney Hall holds 2,265 people, and many concertgoers don’t realize that any noise they make can be heard by someone else, especially those closest to them. For the sake of all music lovers and musicians, consider the following guidelines for behaving courteously during performances.

Needless to say, it is best to save conversation for after the concert, but realistically an auditorium with 2,000 people will never be absolutely silent — even for a short 20-minute piece of music. If you must talk to someone seated next to you during a performance, make sure that you lean close to that person’s ear and whisper – even though any audible voice can be heard by people near you.

Try to read the program before the music begins or during intermission. The acoustics are so sensitive in the Hall that people rows away can hear you turn the pages of your program. Also, if you absolutely must look through the program, do not hold it up high because you will inevitably block the view of the performers for the person behind you.

Believe me, I don’t want to hear you coughing, especially during the quietist moments of the music. But, I also don’t want to hear you unwrapping your cough drop, especially when you’re doing it slowly, dragging the process out for minutes on end, because you think that makes it quieter, when actually I’m hearing every agonizing crinkle. So, if you think you will need to suck on a cough drop, suck on this first: unwrap them before the music starts and leave them in the loose wrapper so you won’t make a lot of noise when you need one.

Coughing and sneezing are probably the most disturbing things you can do because they can be heard by everyone in the Hall. But, hey, it’s unavoidable sometimes. So, what can you do to minimize the disturbance, not to mention the spread of germs?  First, try not to cough during the music. But if you must cough, try to do so during the loudest part of the music. If you can’t hold it until then, then cough into the crook of your arm or into a handkerchief to muffle the sound.

Echoing Down the Hall

This is a corollary to the above. If you have to leave because of a coughing fit, especially if you are sitting in the Orchestra East or West sections, do not cough loudly after you enter the hallway. Remember that the hallway is still inside the Hall and everyone can hear you coughing. Try to wait to cough until you leave the hallway through the doors opened for you by the ushers.

The floors of Disney Hall are wooden, which is better for the acoustics. However, it also means that the hard shoes you wear can be heard not only when you walk on the floors, but also when you move your feet during a concert. So, if you must move your feet for comfort try to do so quietly. If you are the kind of person who likes to keep time with your feet, then wear soft-soled shoes.

Women (and some men), please don’t wear jingly jewelry that makes noise every time you move your hand or arm. And don’t go into your purse in the middle of a performance. If there’s a chance you might need to go into your purse, unzip it ahead of time so at least that part won’t disturb your neighbors.

If it’s on your lap, it may fall on the floor. Please do not keep anything on your lap, including purses, canes or concert programs, because if they fall, they will make a disturbance than can be heard onstage. If you don’t realize how disturbing that can be, just ask András Schiff.