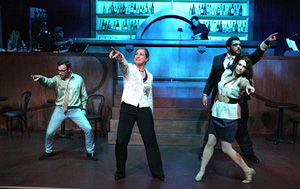 DOMA Theatre Company presents a mixed bag of vocal talents backed by a bang-up band in Tony Award-winning composer Jason Robert Brown’s “Songs for a New World,” an hour-and-45-minute theatrical cabaret of his songs strung together without dialogue at the MET Theatre.

Standout of the four-member cast, Andrea Arvanigian has the vocal chops, the smooth dance moves and a riveting stage presence at her command — all quite evident in her first solo of the evening, “I’m Not Afraid of Anything.” Velvet-coated-powerhouse-voiced Malek Hanna really shined in his featured solo “She Cries.” AnnaLisa Erickson performed all the comic songs reminiscent of Bette Midler, but in need of the pathos and comic timing. Mookie Johnson’s voice strained on many of his songs; I wish their keys had been lowered to better fit his vocal register.

Props to scenic designer Brandy Jacobs for her elaborate, lush double-leveled nightclub set; quite good enough for one of the bigger theater houses in Los Angeles, let alone for a small non-equity venue.

Kudos to sound designer Joseph Montiel for the production’s clear sound system, the best I’ve heard in a small house, allowing the audience to hear the vocals accompanied by, instead of overpowered by, the very efficient band of five, crisply led by conductor Chris Raymond. No kudos for the rain sound effect introducing each act; it sounded more like static from an old record player needle than rain.

Marco Gomez directed his cast sans any layers of subtlety.  All sung their songs with the same full-on intensity. Particularly lacking in direction was Hanna’s soaring solo “King of the World,” in which two women distractingly pawed at his chest while he sang.  If this was supposed to be illustrating passion or seduction, this was an epic fail.

Cute choreography by Angela Todaro was handled with various degrees of proficiency — Arvanigian and Hanna coming out the best.