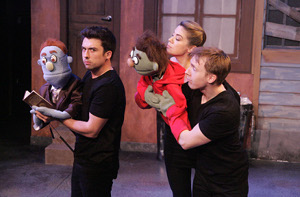 With what must be a fraction of the production dollars the Music Center has to mount their large venue musicals, able director Richard Israel and his equally competent production team of musical director Chris Raymond, choreographer Angela Todaro and puppet master Libby Letlow have crafted a finely tuned two hours of entertainment most large venues would be proud to achieve themselves.

“Avenue Q” combines singing puppets (worked by humans in full sight) with singing humans in a telling, enlightening tale of adult New Yorkers growing up and getting along. Sometimes you don’t know whether to look at the puppet or at the actor who’s working them, and that’s not necessarily a bad thing.

Lead male human Chris Kauffmann winningly sings, dances and charms as two puppets: Princeton, the newbie to the Avenue Q apartments, and Rod, the closeted roommate of Nicky. Lead female human Danielle Judovits fills the MET Theatre with her winsome vocals as two puppets: the more innocent Kate Monster and the definitely not innocent Lucy the Slut. The third human providing vocals ranging from growling basso to high-pitched punch lines, Mark Whitten scores with his spot-on deliveries of the sexual identity-questioning Nicky, the reclusive Trekkie Monster with a secret or two, the devilish Bad Behavior Bear and others.

The rest of the singing humans of the cast (Benai Boyd, Chris Kerrigan and Janelle Dote) can also sing, and well they do; especially Dote when she gets to come out from behind her heavily accented comic tones to really belt out some incredible notes.

Raymond conducts an effective orchestra of five well amped by sound designer David Crawford. (Crawford effectively mikes all the performers so that all their lyrics and melodious notes can be clearly heard.) Staci Walters designed the fun and functional apartment facade with “Laugh-In”-like openings and closings of windows and re-appearing video screens for the effective cartoons of Jason H. Thompson.

“Avenue Q’s” clever songs (including “It Sucks to Be Me,” “If You Were Gay” and “Everyone’s a Little Bit Racist”) translate well from a large venue to a more intimate setting like the MET Theatre.