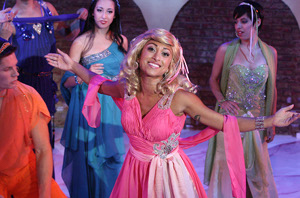 DOMA Theatre Company has hit it out of the park, er, out of the skating rink, with its production of “Xanadu,” a fun-filled, high-energy, camp evening of strong voices, good dancers and feel-good 1980s songs. Director Hallie Baran makes sure her talented cast nails every dance move and sharp put-down at a smooth, breakneck pace.

For those not familiar with the original “Xanadu” movie from 1980, Olivia Newton-John played a Greek muse who came down to earth with her sister muses to inspire a frustrated artist to open up a skating rink/disco.

Lovlee Carroll limns the Newton-John role with a winking homage to Newton-John’s innocence, a very credible Australian accent and gorgeous, soaring vocals. Carroll deftly reveals her sassy side with her first lead vocals in “Magic.”

Veronica Scheyving and Taji Coleman hit bull’s-eyes with their lethal one-liners as two of the muse sisters. Brittany Rodin and Lindsay Zana both also have their moments to shine as two other muse sisters. The two remaining featured muse “sis-tas,” played so deliciously and ever-so-flamboyantly by Alan Lee and Bradley Sattler, take full advantage of choreographer Angela Todaro’s splits, taps, and synchronized steps to stand out in the chorus numbers of muse sisters.

Playing the original Gene Kelly part of Newton-John’s 1920s muse object, David Michael Trevino has the suave and sophistication (and the vocal chops and the smooth tap moves) to escort you back to that elegant era. Matt O’Neill bumbles nicely as the clueless, uninspired Venice Beach street artist.

Costume designer Michael Mullen’s matching chiffon gowns for all the muse sisters (and sis-tas) achieve their intended hilarious effects, with Lee’s swinging back end of his centaur making a most memorable stage exit.

The 1980s songs (including “Magic,” “Evil Woman,” “Suddenly”) have been hysterically re-imagined, with the most gut-grabbing laughing caused by the over-the-top rendition of “Have You Ever Been Mellow.”

The only distractions to this rocking, er, rolling (as in skating), good time are Carroll’s unnatural blonde wig, O’Neill’s sometimes pithy pitch, and concern that some of the tentative roller skaters would fall on their butts!