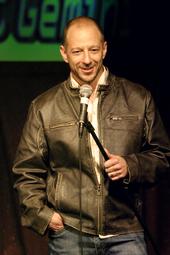 The Downtown Comedy Club brings Peter Berman to the stage on Friday and Saturday, May 29 and 30, at 9 p.m. We’re not sure what Berman’s latest material is like, but the clips (some from his Comedy Central special) on his Myspace page about relationships, winning the lottery, and being forced to do math all the time because he’s broke made us laugh out loud.

The club just re-opened this month at its new venue at 114 W. Fifth Street between Spring and Main, offering well-known headliners and a string of good opening acts, plus host Garrett Morris’ jokes about profanity and sex — and maybe even a performance of “Hoochie Koochie Man” with the Deacon Jones Blues Band.

Owner Kevin Garnier has done a great job with the atmosphere of the Gallery Row space; it’s warm and inviting, and there’s a bar onsite, of course. And, as an added bonus, you can usually find street parking. No sense stressing about the traffic and parking if you’re planning a night of comedy, right?