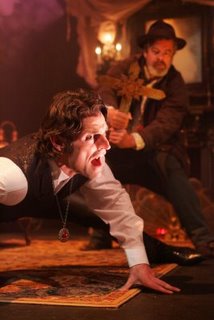 Dracula lovers, your ship has come in – and yes, it’s carrying the irresistible Count and his coffins of Transylvanian soil. It’s docked in North Hollywood, where “Bram Stoker’s Dracula” plays at the Noho Arts Center through May 17.

Bram Stoker’s 1897 novel “Dracula,” the bible of vampire literature, has spawned countless retellings, not all of them worthy of their literary ancestor. Fortunately, director Ken Sawyer adapted Hamilton Deane’s 1924 play, authorized by Stoker’s widow and revised by John Balderston in 1927. The Noho production feels authentic and contemporary at the same time, and has a great balance of horror, romance and even a few laughs.

In this version, Mina (understudy Erica Hess at last Sunday’s show) is Count Dracula’s (Robert Arbogast) first victim, and Lucy Seward (Mara Marini), Jonathan Harker’s (J.R. Mangels) fiancée, becomes the Count’s next conquest (and, it turns out, his reincarnated love from centuries past). Lucy’s mother, Dr. Lily Seward (Karesa McElheny), runs the asylum, where Renfield (Alex Robert Holmes) tries to resist being a slave to the “Master.” Dr. Seward’s friend, professor Van Helsing (Joe Hart), who has a helpful knowledge of folklore, leads her and Harker in a quest to kill the vampire.

Yes, there are plot and character condensations, and no scenes in Transylvania, but those are not to be considered flaws, even by this Stoker purist who has not found satisfactory updates in Anne Rice’s books or Buffy and Angel and has not checked out “Twilight” for fear of similar disappointment. The essence of the classic in the Noho Arts Center Ensemble/David Elzer production is as potent as wolfsbane or garlic is to vampires.

All of the actors, without exception, are outstanding. But, of course, Dracula is the star. Arbogast, with his lean chiseled body and low-riding tight leather pants, is a reincarnation of the sexy, seductive and pretentiously evil vampires played by Frank Langella or Gary Oldman. But Arbogast’s version is no imitation; only once, and to good effect, did a line recall Oldman’s delivery in the 1992 Francis Ford Coppola movie. And a sexy “Dracula” is only appropriate given the themes of the classic novel, including the Victorian notion that female sexuality is a sin and that women willing to be tempted by the evil Count must have their souls saved.

Marini (who usually plays Mina but was cast last Sunday as Lucy) could work as a horror movie screamer and made a convincing transformation from meek innocent to voluptuous vampire. Holmes has a meaty role as an asylum patient who climbs walls and eats flies, but is sane enough to know evil when he sees it. Even the smaller roles of Butterworth and Wells, played by Chad Coe and Tahni Delong, are distinct and interesting characters.

The set design by Desma Murphy is worthy of a film with plenty of lush, romantic details and ingenious devices, like torn “ship sails” that economically transform part of the stage into the ship on which Dracula traveled from Transylvania to England. The literary touch of painting a copy of Henry Fuseli’s 1781 “Nightmare” on the set’s back wall was a creative and thoughtful addition. Throughout the play, a soft light usually stayed on the incubus sitting on a sleeping woman’s chest.

Paula Higgins’ costumes evoke a Victorian era with a contemporary twist. And the atmosphere’s thrills and chills are intensified by Sawyer’s sound and Ovation Award winner Luke Moyer’s lighting. The theater is filled variously with bat sounds, lightning, howling wolves, smoke and more.

The only weakness in the production came near the end. I was unsure what happened to Lucy because Van Helsing says they cut out her heart to save her soul — but then that doesn’t appear to be true. Even so, that’s easily forgiven after an hour and a half of brilliant theater.