‘Drama Queens From Hell’ at the Odyssey Theatre 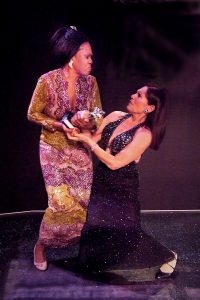 Every writer knows the old adage, “write what you know.” That’s a lesson clearly taken to heart by Peter Lefcourt, the scribe behind Drama Queens From Hell, now making its world premiere at the Odyssey Theatre. While Lefcourt spent the earlier part of his life writing for TV (his credits include series from the ’70s and ’80s like Eight Is Enough and Cagney & Lacey), his more recent efforts have included novels and plays that deal with Hollywood in one fashion or another. Drama Queens is a comedy about Hollywood, ageism and political correctness all hung on a wonderful frame: Billy Wilder’s classic 1949 picture Sunset Boulevard.

At 70 years old, Lefcourt is obviously writing from experience about the challenges facing aging players who still want to work in Hollywood. But rather than offer something dark or bitter, he wisely chose to satirize the entire issue. It was actually a stroke of genius to think of using a modern remake of Sunset Boulevard as the framework for his play, since the film has such a memorable and poignant take on the issue of aging talent in Hollywood. In Lefcourt’s play, we follow the misfortunes of a washed-up TV actress (Christopher Callen), a former Blaxploitation movie bit player (Dee Freeman) and an older pre-op trans woman (Richard Sabine) who are all competing for the role of Norma Desmond in the remake.

Lefcourt’s approach is High Camp… I mean á la Priscilla Queen of the Desert and The Birdcage kind of camp. I should add a disclaimer here that I am not personally a fan of this kind of humor, although I seemed to be in a minority in the performance I attended, to judge by the sustained and ongoing laughter at the shenanigans onstage.

The first act introduces us to the three actresses via their relationship to their mutual despicable manager, Artie Paramecium (Rick Podell). As the competition heats up, so does their bitchiness, and the claws come out. There are heaping helpings of catty insults, sneering put-downs and figurative knives plunged into backs. Each actress also inhabits her own corner of the modern socio-political landscape: Callen oozes supercilious white privilege; Freeman wears the mantle of the angry black woman; and Sabine promotes her trans credentials with swishy gusto. It’s all super stereotyped, but I suppose that’s the point, isn’t it?

I was more entertained in the second half of the play, mainly because it culminates in a hilarious extended sequence in which each of the three actresses audition by performing a scene from Sunset Boulevard for the director (Paul Galliano). If you are familiar with Gloria Swanson’s over-the-top portrayal of Norma Desmond in the film, you’ll laugh out loud at the ever more outrageous takes from each of the actors. As they begin their lines, the same scene from the movie begins to play on a screen in the background, only instead of hearing Swanson’s voice we hear each of the actresses, lip-syncing word for word. The comic effect is magnified by the overwrought acting of all involved. Also adding to the fun is the director’s ultra-gay assistant, Raphael (Andrew Diego), who answers each of the constant phone calls with “Gerard Manville’s production office. Speak!”

The play then more closely follows the film as each of the actresses attempt to seduce the director — unsuccessfully. I won’t tell you who, if anyone, winds up floating face down in a pool in the end, but suffice it to say that the denouement is not exactly in the same tragic vein as the film.

Lefcourt, along with Director Terri Hanauer, has thrust an incisive shiv into both the industry that once sustained him and modern mores, and has done so in a most inventive way. Back in the day, studio chief Louis B. Mayer denounced director Billy Wilder for making Sunset Boulevard, saying “You have disgraced the industry that made and fed you! You should be tarred and feathered and run out of Hollywood!” Wilder’s blunt response cannot be printed here, but it should be noted that the film went on to be nominated for 11 Oscars, winning three (for Best Screenplay, Best Art Direction and Best Score). While this modern-day sendup won’t be attaining those lofty heights, it does provide a rollicking lot of fun for those who like their humor on the snarky, campy side.