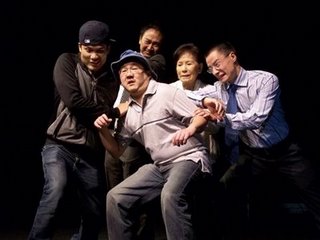 East West Players, the nation’s premiere Asian-American theater, brings Long Duk Dong back to its Little Tokyo stage in “Ixnay,” which opens Feb. 18. Well, not actually Long Duk Dong, but the actor who played him in the classic ’80s film “Sixteen Candles,” Gedde Watanabe. Beloved by a generation of now-middle-aged John Hughes fans who have seen the film over and over and can recite all of the actor’s hilarious lines, Watanabe appeared recently on East West Players’ stage as the grandmother in the company’s hip-hop/anime version of “Pippin.”

If you missed the chance to see Watanabe in drag, be sure to catch him in “Ixnay,” written by Paul Kikuchi (and developed and workshopped in EWP’s David Henry Hwang Writers Institute) and directed by EWP Literary Manager Jeff Liu. This world premiere play is the story of a Japanese-American man who wants to be reincarnated as a Caucasian. Watanabe plays the reincarnation station attendant. Other actors in the cast include June Kyoko Lu, one of the founders of EWP (“Lady in the Water”); Dante Basco (“Hook”); and Aaron Takahashi, member of Cold Tofu improv troupe (“Yes Man”).