‘Eccentricities of a Nightingale’ at A Noise Within 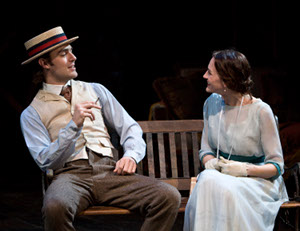 From the first time we see Alma Winemiller on stage, we know she is an outsider. We can see the way other characters look at her and how they talk to her. In A Noise Within’s “Eccentricities of a Nightingale,” we must watch as Alma flits and gestures her way through life in this small, Southern town while her fellow townspeople look down at her. She has an over-the-top personality in a very subdued community, which marks her as a target for ridicule and disrespect. It keeps her from getting what and who she wants.

While difficult to watch at times, the performance by Deborah Puette as Alma is perfectly on pitch. She is countered by steady and honest performances by Jason Dechert and Mitchell Edmonds. None of the characters (or actors) hold anything back, making the play as funny as it is dark. Set on an absolutely magnificent set, designed by Joel Daavid, the play uses many of Tennessee Williams’ favorite themes.

Alma’s mother (played very movingly by Jill Hill) has lost her mind, which hangs over the family and their house like a bad omen. Her love for the golden boy, top-of-his-class doctor Josh Buchanan (played by Dechert) is unrequited and drives her to be even more exaggerated and over-the-top.

Though director Dámaso Rodriguez and his cast are able to find the humor throughout, it is not an easy play. Each character is striving so hard for something, and it is difficult to watch them fail. They pour their hearts out to each other, only to be shut down in heartbreaking ways. It is beautiful, but it will test your ability to weather the storm as an audience member.

Tennessee Williams’ “The Eccentricities of a Nightingale” runs from March 19 to May 28 at A Noise Within on 234 S. Brand Blvd., Glendale. Visit www.ANoiseWithin.org.