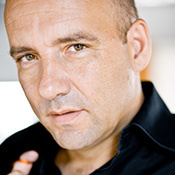 Throughout the history of music, there have been countless times when an orchestral conductor has been unable to carry out his or her duties, and a young, or at least relatively unheard of, conductor, usually an assistant conductor, has had to literally step up to the podium at the last minute. Of course, perhaps the most memorable instance was in 1943 when a young assistant conductor of the New York Philharmonic, Leonard Bernstein, had to replace an ailing and much older Bruno Walter at the last minute and without the benefit of any rehearsals. The rest, as they say, is history.

This past weekend, the Russian conductor Vasily Petrenko had to cancel his appearance with the LA Phil due to the unexpected death of his mother. But instead of a younger future star waiting in the wings to take his place, the Phil engaged the 50-year-old established French conductor and director of the Dallas Opera, Emmanuel Villaume.

The first thing one notices about Villaume is that he is a large man with large hands. And he literally and figuratively loomed large over the orchestra. Even his movements were large, with frequent wild and dramatic gesticulations. However, the music making was undeniable.

On May 2, Villaume opened the concert with Im Sommerwind by Anton Webern, composed when he was 20 and before he began studying with Arnold Schoenberg. The piece wasn’t heard publicly until after the composer’s death in 1945, which in retrospect is unfortunate because it is an evocative and brilliantly orchestrated composition. It begins and ends with barely audible playing by the strings, and in between are alternating segments of orchestral excitement and calm, which Villaume and the orchestra handled skillfully. 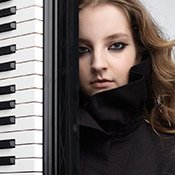 The first half concluded with the Piano Concerto No. 3 in C minor, Op. 37 by Beethoven with the young French pianist Lise de la Salle as soloist. Villaume delivered a crisp and powerful performance, exploiting every accent and controlling the orchestra perfectly so that the audience could always hear de la Salle’s playing, which was extraordinary. She mesmerized the audience. She navigated the fast arpeggios so deftly that each note could be heard. And whether playing fast or slow, she hit all the notes with bell-like clarity. After some passages or during rests, her hands hovered above the keyboard as if weightless. It is understandable why one person began clapping at the conclusion of her cadenza in the first movement — her playing had that kind of effect. On Saturday, de la Salle demonstrated that, at the ripe young age of 26, her playing is that of a much older and seasoned pianist.

The work originally scheduled for the second half of the program, Ein Heldenleben by Richard Strauss, was replaced with two shorter tone poems, Don Juan and Till Eulenspiegel, by the same composer. On this day of the Kentucky Derby, Villaume broke out of the gate at a full gallop with Don Juan, which was almost too fast. However, his energy and enthusiasm, which was written all over his face as he conducted, more than made up for the rapid tempo. And he transmitted that energy to the players who gave a standout performance. In particular, Principal Oboist Marion Arthur Kuszyk played the solo strongly, yet with longing.

The tempo of his Till Eulenspiegel was right on the mark. And together with the orchestra, he delivered a tour de force performance. Special kudos to Andrew Bain and Amy Jo Rhine who nailed their horn parts.

And kudos go out to Villaume not only for filling in at the last minute, but also for surprising the audience with such a memorable performance.