“Fallen Angels” at the Pasadena Playhouse 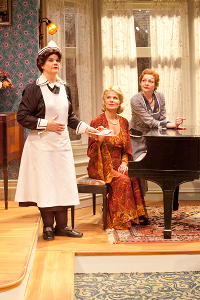 Noel Coward aficionados, and theater lovers in general, will be in for a delicious hour-and-45 with the Pasadena Playhouse’s current production of “Fallen Angels.” Director Art Manke, a veteran of six Coward shows, keeps his talented cast of six smoothly paced through the traditionally wordy Coward prose, hysterical physical pratfalls and paper-thin cover-ups.

The plot revolves around Julia and Jane, both happily married, but presently awaiting the arrival of Maurice, a Frenchman they each had a fling with. As the two husbands are off golfing for the weekend, the two ladies, over drinks and some food, alternately plan their reunion and reminisce on their past lustful experiences. With Pamela J. Gray as Julia Sterroll and Katie MacNichol as Jane Banbury, the stage rocks with precision-timed hilarity as the two actresses play off each other effortlessly — sparring, enticing, enjoying each other’s company and shared memories.

MacNichol’s vivid visual and vocal descriptive musings of her seductive encounter with Maurice result in the intended, equally vivid and expressive reactions from the delightful Gray’s Julia.

As the Sterrolls’ newly hired maid Saunders, who has dabbled in various careers and is both knowledgeable and verbose, Mary-Pat Green steals every scene she’s in. Green takes to the grand piano easily, switching from cockney piano bar to sultry Ethel Waters/Lena Horne.

The talented actors — Loren Lester (as Willy Banbury), Mike Ryan (as Fred Sterroll) and Elijah Alexander (as Maurice Duclos) — all quite ably complement “Fallen Angels,” but this play, as Coward has written it, belongs to the three actresses.

Set in an era of gramophones and wired-to-the-wall, rotary-dialed telephones, the morals of the early 1900s found it scandalous that an unmarried woman could have any sexual encounter — called an “affair” even though the woman wasn’t married.