Film Review: ‘Eames: The Architect and the Painter’ 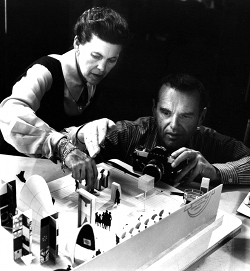 Ray and Charles Eames photographing an early model of the exhibition "Mathematica: A World of Numbers and Beyond," 1960 / ©2011 Eames Office, LLC

You may not know it, but most people are informally aware of Charles and Bernice “Ray” Eames’ aesthetic impact on the world. In “Eames: The Architect and the Painter,” producers Jason Cohn and Bill Jersey recount the lives and creative output of the Eameses, who are best known for their modern furniture (such as the molded plywood Eames Lounge Chair and Ottoman) and their ventures into film (most notably “Powers of Ten,” where a couple is seen picnicking at regular scale, and perspective then zooms out to a view from the far universe and finally zooms back in and through to the atomic level).

The film (written by Cohn and narrated by James Franco) follows the collaborative couple’s career as it moves from furniture design and manufacturing to the postindustrial communication of ideas and information. Their work had ties to political, economic, and technological development (some of their clients were the U.S. government, furniture retailer Herman Miller, and IBM) and their work subsequently tracked the complex changes in culture. This mix of partnerships revealed an unsettling relationship between art, commerce, and culture that appeared to catch the Eameses between modern and postmodern sensibilities.

The irony in the title of the film is the fact that Ray rarely painted, even though she was highly capable (she studied under Hans Hoffman), and the fact that Charles dropped out of architecture school and was never a licensed architect. The irony in the film is how the subjects of the documentary are disturbingly tarnished by abrupt emphasis on infidelity issues and by the questioning of Charles’ authorship (former office staff members in the film claimed he took full credit for collaborative efforts). After getting to “know” the Eameses, the infidelity segment at the end of the film made me feel sorry for a neglected Ray. The issues with authorship similarly followed the film’s building up of the Eameses in a very positive light, and then unexpectedly tearing them down by unraveling the documentary’s carefully crafted personas.

The infusing of these negative aspects into the film was troubling, especially if they were inserted for dramatic subjectivity in the documentary format. It was disturbing to see the film’s subjects besmirched after presenting them in such a delicately admirable way. It could possibly be that the Eameses had been rendered too likable for their flaws to be exposed, but for the first film to be made about them since their deaths (Charles in 1978 and Ray in 1988), I think the positive aspects of their lives would be more appropriate for a lasting, historical preservation of their significance. After all, this film seems to fulfill a need to solidify their influence and positive accomplishments in the historical record, not their shortcomings.

“Eames: The Architect and the Painter” presents a documentary that reveals the limitations of imposing a (cinematic) form upon a collaborative couple who were endlessly dynamic and complex. By trying to compress a chaotic expanse of creative output into a tidy historical narrative, the resulting message regarding Charles and Ray can be appropriately ambiguous and disconnected. The chronicled accelerating change in their work’s media and messages captures the disjointed, experimental approach of the Eameses, which is interestingly mirrored by the splintering and clouding of the film’s message as it tries to contain the voluminous chaos of their production. Like “Powers of Ten,” the film tries to view something dauntingly large and diverse; unlike “Powers of Ten,” the film doesn’t maintain a distinct, linear progression and becomes unfocused by a diffused detail overload.

But it seems the Eameses weren’t concise, and the entangled layering of information appeared similarly unfocused. If intentional, this defocusing not only is an effective and clever means of understanding the atmosphere created by their quirky and experimental collaboration, but it poetically captures the essence of the Eames epoch.

I struggled with the desire to see clearly organized and objective historical information, but by taking a distanced perspective after viewing the film, the blur came into focus and I was able to appreciate the Eameses in a fully personal, subjective way. The oddly convincing point of view used in this documentary conveys the unusual beauty of the Eameses’ insatiably creative, inquisitive, and progressive process, which left an enduring impact on aesthetics and design. “Eames: The Architect and the Painter” is a great chance to get to know formally, or be reacquainted with, the artists and their legacy.

“Eames: The Architect and the Painter” opened in Los Angeles in November and is available on DVD from First Run Features.