by Julie Riggott | May 30, 2017 | Classical Music and Opera, Entertainment and Events | 0 comments 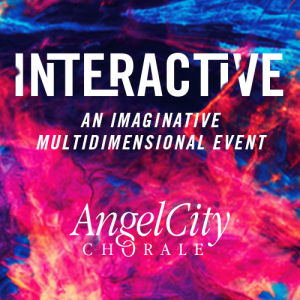 Angel City Chorale (ACC), the esteemed Los Angeles choir led by Founder-Artistic Director Sue Fink, will present Interactive, an imaginative and multidimensional concert event during the first weekend in June. An engaging, one-of-a-kind event that rebels against the traditions of choral performance, Interactive will fuse choir and cyberspace to break down the barriers between performer and audience and honor the notion of connectivity in our modern world. The inclusive, participatory concerts will take place at Wilshire United Methodist Church in Los Angeles Saturday, June 3, and Sunday, June 4, at 7 p.m.

Culture Spot LA readers can win a pair of tickets to the concert on Sunday, June 4. Email editor@culturespotla.com to be entered in a drawing.

“Angel City has always been known for our fresh, spontaneous approach to choral performance and our devotion to diversity of membership and material, but this time we are out to break the choral mold entirely,” Fink said in a release. “The music is breathtakingly varied from Bach to R&B Gospel, but that’s just the beginning of the adventure. Traditional pieces will be reinvented with multi-dimensional tools. We will use apps, screens, visual artists and audience participation to break down the fourth wall and take our audience where no choir has ever gone before. We will have virtual guest performers from South Africa and visual artists interpreting our performance live and more. I don’t want to give away all the surprises, but for once we are going to ask the audience to NOT turn their cell phones off.”

Featuring a nontraditional mass with a diverse range of musical selections rooted in Jazz, South American cultures, Classical, Urban/R&B scenes, and more, ACC’s 160+ member choir and 22-piece orchestra will guide audiences on a participatory trip that honors the multifaceted idea of connection in our complex, modern world.

The concert will blend pieces from traditional masters like Bach and Mozart with contemporary favorites including Cyndi Lauper and The Beatles.

Interactive will also feature the world premiere of “A Vibration,” an original composition by Los Angeles-based composer and ACC choir member Andrew Cheeseman that incorporates gravity waves and other astrophysics data converted into sound. “A Vibration” and a few other selections from Interactive will test drive a brand new mobile app called YourchestraApp, which will have its world premiere at this concert. The app will allow phones to be “played” live from the stage. It will use the phone’s speakers for sounds, and the screen for images.

The show will finish with a dazzling rendition of “All You Need Is Love,” which melds past and present as a beautiful ode to the 50th anniversary of The Beatles performing their song for the world’s first simulcast in 1967, heard and seen around the world from Abbey Road.

Tickets range in price from $22 for children to $75 for VIP packages. For additional information, visit http://www.angelcitychorale.org.