by Julie Riggott | May 30, 2018 | Classical Music and Opera, Entertainment and Events | 0 comments 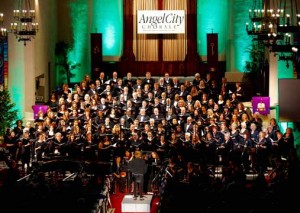 Angel City Chorale (ACC), the acclaimed Los Angeles choir led by Founder-Artistic Director Sue Fink, will celebrate its 25th birthday this year with an extraordinary spring concert event, One World, Many Voices II, during the first weekend in June. An exhilarating sequel to ACC’s original 2009 production, this concert will embrace the power of diversity that ACC is known for, with vibrant songs representing different cultures from around the world. Now, globally recognized, Angel City Chorale welcomes dear friends from South Africa to make this special anniversary edition truly memorable; the show will feature a powerful guest appearance from Cape Town’s Amy Foundation youth choir, as well as a new commissioned work from Grammy award-winning composer Christopher Tin. One World, Many Voices II is set to take place at the Immanuel Presbyterian Church in Los Angeles on Saturday, June 2, and Sunday, June 3, at 7 p.m.

Culture Spot LA readers can win a pair of tickets. Email editor@culturespotla.com with ACC in the subject line and your choice of date in the body of the email.

Perhaps ACC’s most exciting and culturally convergent production yet, One World, Many Voices II brings under one roof the celebration of rhythmic and vibrant sounds of many cultures. Featuring an electrifying blend of music from around the world, ACC’s 160+ member choir and orchestra will treat audiences to a one-of-a-kind assortment of pieces that reflect the diversity of the group itself as well as their special guests from South Africa.

The spring concert will see ACC’s partnership with the Amy Foundation Youth Choir expand in beautiful new ways. The Amy Foundation, originally known as the Amy Biehl Foundation, is known for providing safe environments in the challenged township communities of Cape Town. Their emphasis on the creative and academic development of emotionally well-rounded children and teens was the catalyst that brought ACC and Amy together back in 2011, when ACC had the privilege of traveling to Cape Town to perform several benefit concerts for (and with!) Amy Foundation youth. This coming June, ACC is honored to return the favor: members of the Amy Foundation Youth Choir will travel from Cape Town to Los Angeles to perform with ACC on stage. Demonstrating the mission of “Building Community, One Song at a Time,” ACC looks forward to sharing and learning from the kids about the music of South Africa and will also provide Amy Foundation youth with a rich cultural experience of Southern California.

Following its hit concert, A New Home For The Holidays, in December (which topped 1,000+ attendees each night), ACC’s upcoming edition combines contemporary favorites like “A Thousand Beautiful Things” by celebrated singer-songwriter Annie Lennox, with the rhythmic and lilting “Samba Do Avião” by Antônio Carlos Jobim, transporting audiences to past and present-day realities of music and culture. Widely loved favorites like Toto’s “Africa” will be performed alongside music from Nepal, Bulgaria, Russia, Mexico, Indonesia and of course South Africa, showcasing Angel City’s signature display of choral theatrics as well as their ability to resonate with attendees of any age or background.

One World, Many Voices II will also feature the world premiere of ACC’s first commissioned work: an original song by revered Grammy Award-winning composer Christopher Tin. The piece, which celebrates the local-meets-global vibe of the city, fits naturally into the concert’s repertoire as well as the group’s history, which has long been characterized by a mutually beneficial relationship with Tin (aside from sharing the stage numerous times with the masterly composer, and singing on his second album, ACC also recorded with Tin at Abbey Road’s iconic studios).