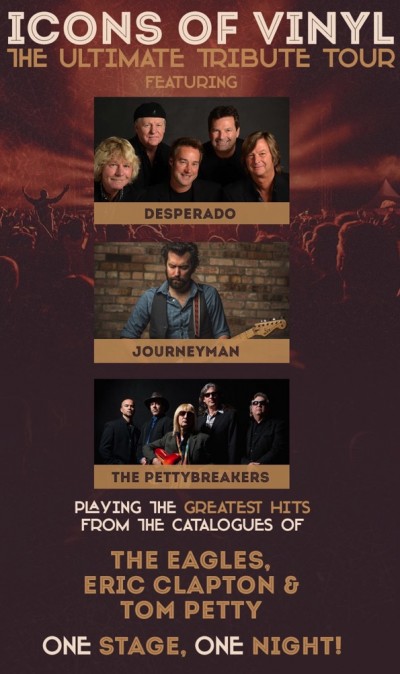 For one night only! Kala Koa Entertainment presents “The Icons of Vinyl: The Ultimate Tribute Tour,” featuring Journeyman (music of Eric Clapton), Desperado (music of the Eagles), and The PettyBreakers (music of Tom Petty & the Heartbreakers) at the Redondo Beach Performing Arts Center on Friday, Nov. 2, at 7 p.m.

Culture Spot LA readers can win a pair of tickets to the concert. Email editor@culturespotla.com to be entered in a drawing.

Shaun Hague has built quite the resume in the last decade of his life. At just 17, he was named “The Best Young Blues Guitarist” by The House of Blues and by the age of 21, the young guitarist was playing guitar for blues phenom Kenny Wayne Shepherd. His career has also seen him sharing the stage with Amos Lee, John Waite, Terra Naomi, performing on Jay Leno and sitting in with John Fogerty. In honor of his biggest musical influence (Eric Clapton), Hague has been making waves with his Journeyman – A Tribute to Eric Clapton. The show features Robert Monroe (keys/vocals), Darius Peterson (drums) and Laura Lopardo (backing vocals). Together, they provide a powerful performance of all aspects of Clapton’s career from “Bluesbreakers” to “From the Cradle.”

Desperado has proven time and time again to be a perfect interpretation of The Eagles’ music. They are so close to the original band that the former CEO of Atlantic Records, Jerry Greenberg, fondly touted the band as “The finest replication of Eagles songs I’ve ever heard.” The band consists of some very accomplished musicians. The front man and band founder, Aaron Broering, has a BA in music education and has released some critically acclaimed original material. His debut CD, “The Road Less Traveled,” has been well received by Orange County music critic Robert Kinsler. He has successfully led several other professional projects, such as Pink Floyd and U2 tribute bands. Aaron’s current endeavor includes the former members of The Beach Boys called The Surf City All-Stars.

The PettyBreakers is the nation’s premier Tom Petty and the Heartbreakers tribute act. Based out of Southern California, this band is comprised of veteran musicians with decades of experience performing in tribute acts, and recording and performing with international bands like The Rembrandts and The Gin Blossoms. The PettyBreakers put on a show that recreates the sights, sounds and live experience of an actual Tom Petty concert.