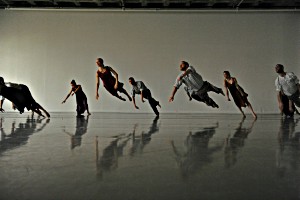 Promotional materials point out that the selected films encompass almost every style of movement. This includes “modern, post modern, world, tap, dance theater, ballet, hip-hop and practically all dance that has been captured on film in a way that is of quality and essential value.” Dance Camera West’s goal is to “stretch the imagination and change the way we think about dance.”

Given the potpourri of options, it looks like there’s something interesting to see for every member of the family, dancers young and not-so-young, and even folks who might swear that they’d never set foot onto a dance floor.

Culture Spot LA readers can win a pair of tickets to the festival. To enter the drawing, email editor@culturespotla.com with Dance Camera West in the subject and your choice of program in the body of the email. Choose your day/program from the following: Opening Night International Shorts (April 20), Featured Documentaries (April 22), In the Steps of Trisha Brown & CalArts Emerging Artists Awards (April 22), Family Day (April 23) or Screening of “Mr. Gaga” (April 23).

Opening night includes a live performance by the Seaweed Sisters, a zany trio of comic dancers, followed by a line-up of 10 short dances made for the screen by an international cast of artists. That’s Thursday, April 20, at 7:30 p.m. at Royce Hall.

The Friday, April 21, evening is called “A Celebration of UCLA Dance 1962-2017.” This program includes a free 6:30 p.m. screening at the Fowler Museum of work by Professor Emeritus Allegra Fuller Snyder and honors the legacy of the six founders of UCLA Dance. Moving down the campus to Glorya Kaufman Hall, current faculty members’ short dance films are projected from 8 to 10 p.m.

Documentaries are the name of the day from noon to 5 p.m. on Saturday, April 22, at the Fowler Museum. Along with the artist portraits that make up this roster of movies, local dance filmmaker Sarah Elgart will screen her “Ghost Story,” and Vincent Kay’s “Bill T. Jones” highlights the Cal State University Long Beach’s production of a Jones choreography based on Flannery O’Connor’s “The Artificial N*****.”

That evening, at 7 p.m. in the Fowler Museum, CalArts Emergent Artists Awards will join the West Coast premiere of “In the Steps of Trisha Brown.” Brown’s company was in town last month to present excerpts of her choreography at non-traditional sites across the city. The film is centered on the National Opera Ballet of Paris’ staging of the recently deceased choreographer’s revolutionary “Glacial Decoy.”

Family Day is Sunday, April 23. This begins at 1 p.m. at the Fowler Museum and includes animated and humorous dance films and a Flipbook Workshop. At 3 p.m., a special screening of “Mr. Gaga” celebrates Israeli choreographer Ohad Naharin.

The next weekend, Saturday and Sunday, April 29 and 30, are free performances and screenings at the Santa Monica Pier beginning at sunset. These “To the Sea: Dance Concerts” include live and filmed creations by Jacob Jonas/The Company, 7 Fingers, Seaweed Sisters, Tony Testa and more.

Lots of choices for discerning tastes.