Free Tickets to ‘Grim and Fischer’ by Wonderheads 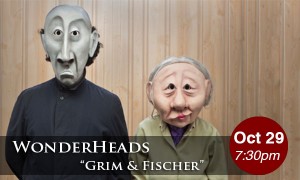 Théâtre Raymond Kabbaz presents Grim and Fischer by Wonderheads, an award-winning comedy performed wordless and in full-face mask, that will take the audience to a wonderful world of imagination. In this play, the Grim Reaper meets his match in Mrs. Fischer, a stubborn senior whose will to live is a force to be reckoned with. Equal parts hilarious and touching, this physical comedy by mask imagineers the Wonderheads is the story of a tenacious granny who comes face to face with the Grim Reaper and must put up the fight of her life to escape his definitive grip.

Culture Spot LA readers can win a pair of free tickets to the show. Email editor@culturespotla.com with “Wonderheads” in the subject line.

Grim and Fischer is performed in full-face mask, a form so magical you will forget your age and marvel in childlike delight. Wordless and whimsical, it has been described by audiences as watching a living cartoon, or live-action Pixar.

The show has been touring the continent since 2009 and leaving sold out houses and delighted audiences in its wake. It was the recipient of five Best of Fest awards in 2011 and the League of Cincinnati Theatres Award for Outstanding Production in 2012. A profoundly fun blend of physical theatre, comedy and pathos, Grim and Fischer is an extraordinary experience you won’t soon forget.