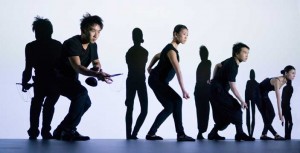 They’re not exactly obscure: enra gained global renown when their performance for the 2020 Tokyo Olympic bid went viral. The ensemble, led by video artist Nobuyuki Hanabusa, has been invited to perform at theaters and festivals around the world, including the Cannes Film Festival in France and a successful audition on America’s Got Talent. They have performed in 26 countries on six continents to overwhelming acclaim in just over four years since their founding.

Enra will perform their newest show, PROXIMA, Friday, Oct. 21, through Sunday, Oct. 23, at 8 p.m. at the Montalbán in Hollywood. The new show features dynamic new works as well as audience favorites “primitive,” “pleiades” and “FUMA-KAI.” Moods in the all-ages show range from suspenseful to serene, reverent to playful, emotional to upbeat. With contextual references to Japanese pop culture, cinema, video games and even astrology, enra captures the postmodern and eclectic spirit of Tokyo, their sprawling, contemporary home. Check out event trailer here [:15] and here [:30].

Culture Spot LA readers can see Friday’s show for free. Email editor@culturespotla.com with “enra” in the subject line for a chance to win a pair of tickets.