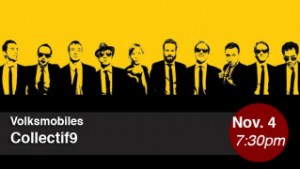 Formed in 2011 in Montreal, by Thibault Bertin-Maghit, collectif9 is a group of nine classically trained string players who aren’t shy about pushing the boundaries. The nine musicians and friends met as students at Université de Montréal and McGill University. In choosing the music for their young ensemble, bass player and lead arranger Thibault Bertin-Maghit aims to keep the pieces relatable to their peers. “I always look to works that have influenced non-classical musicians, focusing on classical music that also connects to pop culture, to give it a context in our own world,” he said in press materials.

TRK is giving away two pairs of tickets to the show! Email editor@culturespotla.com with TRK in the subject line for a chance to win.