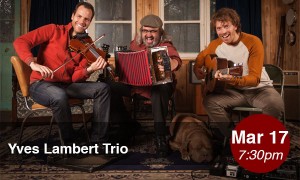 Theatre Raymond Kabbaz (TRK), the performance space at Le Lycée Français de Los Angeles, presents Quebec-based Yves Lambert Trio on March 17 to celebrate St. Patrick’s Day and the month of the Francophonie (French Language). The 70-minute performance will start at 7:30 p.m., but get there early for a free beer tasting before the show.

Quebec’s distinct musical style developed over four centuries around the kitchen hearths and in the dance halls of the province. Descendants of the early French immigrants passed down French songs and stories, slowly incorporating influences from their Irish and Scots neighbors to create a uniquely Quebecois musical culture.

Yves Lambert is one of the founding members and an emblematic figure of La Bottine souriante. He has played with the band for 26 years. In January 2003, he went searching for new musical adventures, surrounding himself with young talent, and then founded the Yves Lambert Trio in 2010: Yves Lambert (vocals, accordions, harmonica, jaw harp and percussion), Olivier Rondeau (acoustic and electric guitars, banjo and vocals) and Tommy Gauthier (violin, mandolin, guitar, vocals and feet tapping).

Culture Spot LA readers can win a pair of tickets to the show. Email editor@culturespotla.com with TRK in the subject line.