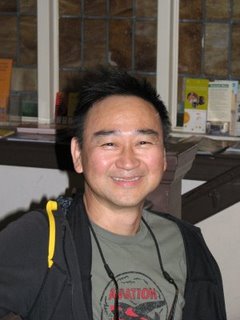 Watanabe, who just finished a film and is part of a TV pilot in development, sat down in the lobby of EWP’s David Henry Hwang Theater one evening before rehearsal for “Ixnay” to chat with me. The laughter punctuating his comments was so hearty and infectious, he could sell tickets to listen to him just talk and laugh on stage.

Tell me about your character Tadashi Ozaki.
Tadashi Ozaki is head of the Reincarnation Station No. 92, which is when people die, they come and see me before they transition.

Why doesn’t he?
I think he just had a really hard life [laughs] as an Asian American. You know, the discrimination. He wants to experience being a white person. It’s kind of profound in that sense. I totally get it. But my character is totally befuddled at him. Consequently, he shows his racist side because he pushes it so hard…. I try to reason with this kid about why it’s so important why he needs to go back as one. I give him lots of lists, and it’s like [laughs] the reasonings are kind of comical. But in an odd way, they’re kind of real too. … One line says the Japanese-American race is kind of disappearing because of interracial marriages and all that kind of stuff. In the year of Obama, you kind of wonder.

Is this a laugh-out-loud comedy?
I have no idea how this audience is going to react to this. It’s kind of like [Albert Brooks’] “Defending Your Life” Japanese style, in a way. [laughs] It will be interesting to see what the audience, what the generations are going to think of this.

How are rehearsals going for this word premiere?
There’s an open door for me in this play and I realize that [director Jeff Liu] is letting me do that and I respect that. It’s been neat. He knows that I’m always trying to figure something out. I will always question something when it’s just not working…. This is what’s so great about East West is that you can explore that. You don’t have to be perfect. I think they want to make a good play and they want to figure out how to make sense of it.

Is that why you like working here? [Note: Watanabe also performed in EWP’s “A Funny Thing Happened on the Way to the Forum” in 2001 and last year’s “Pippin.”]
I think the reason why I like working here is that it’s just comfortable. … They all know me. They can slap me in the face when I’m really being ridiculous. They can tell me to go to hell. Or I can tell them to go to hell. [laughs] So it’s sort of comfortable. It’s like you’re in your living room. And what better place to do theater than in your living room? At least when I was a kid we all did theater in the living room.

Were you funny when you were a kid?
No. My sisters thought I was funny. I was very serious and very brooding. I fought people a lot. So maybe that’s what made me funny. I defended a lot of people. You grew up in Utah, so all the white people you just wanted to slap in the face. Excuse me, sorry. It’s true. [laughs] All the Mormons, sorry. I wanted to slap them in the face. [laughs] Especially the girls that were always complaining about girls that didn’t wear bras. I thought, “Oh god, get over yourself.” That’s all the Mormon girls cared about: “She’s not wearing a bra.” My best friend was a girl from Boston and she never wore a bra and she was the most brilliant girl in that whole class, just sophisticated. Her mother brought her to Utah and she said, “What the f!$* am I doing here?” — excuse me — and we became friends immediately.

I noticed on Tadashi’s Myspace page (www.myspace.com/tadashiozaki) that he said he hated “Sixteen Candles.” Now why is he disparaging that film?
He did? I never said that. [laughs] Somebody made that up.

Well, you know, everybody still loves that movie. What’s it been, 25 years? People still love that movie and talk about your character Long Duk Dong. [Note: Some in the Asian-American community found it controversial.]
Can’t live it down.

No. But do you want to?
No, I don’t really think about that much anymore. The last thing I ever did that made any sense to me about it was I went to a benefit for homeless women who needed underwear and I just thought at the last moment, you know I’m going to raise them some money, so I took the microphone and I said I will sell any line that you want, put it on your cellphone if you give them $10. They made over $2,000 in the crowd, something like that. I thought, well, there you go. Who cares anymore?

If you could be reincarnated…
Oh god!

You know I have to ask this. I saw your Myspace video (www.myspace.com/tadashiozaki), but I figured I’d ask this fresh.
I would just like to be able to be reincarnated. Let’s just say if I decided to come back as an actor, I would love to come back in a time when color didn’t matter for the role. Because I think you don’t get considered for a lot of stuff. In one sense, you can’t really develop your talent, and I think that’s the hardest to live with when you are in this business.