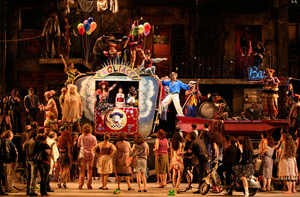 We don’t hear much these days about the Seven Deadly Sins, the classification of vices handed down by early church teachings. While today’s standards of morality elicit barely a shrug for most offenses, LA Opera’s current pair of short operas reminds us of the former notoriety of two of these vices: In Giacomo Puccini’s Gianni Schicchi it is Greed; in Ruggero Leoncavallo’s Pagliacci, it is Lust. An auspicious pairing to be sure, and these productions highlight them in thoroughly amusing ways.

It should be said at the outset that for Plácido fans, this is a not-to-be-missed event. He sings the title role in Schicchi and conducts the orchestra for Pagliacci and does an admirable job at both. But of course we want to see him do more than wave a baton, so it is in his role as the sly, nouveau riche Gianni Schicchi where we can revel in Domingo’s still-potent vocal powers.

The story is based on an episode in Dante’s Inferno, which was in turn based on actual people and events in 13th-century Florence. The basic setup involves the Donati family, who discover that their dying patriarch has left all his property to the church. They call upon Gianni Schicchi, whom they regard contemptuously as a mere peasant, to assist them since he has some legal skills. He impersonates the now-deceased Signore Donati in order to rewrite the will, but in the process leaves the family with a lot less than they bargained for.

This production of Schicchi is the brainchild of Woody Allen, originally conceived and directed by him in 2008. Although directing responsibilities have passed to Kathleen Smith Belcher, we still have Allen’s characteristic touches such as the setting in a shabby 1940s Italy and his comic projected credits at the beginning.

Domingo’s impressive performance aside, the singing is quite good, although not standout. A special nod goes to Andriana Chuchman as Lauretta, who offers an appropriately emotional version of the famous aria O mio babbetto caro. Grant Gershon conducts the orchestra and skillfully interprets Puccini’s part modern, part romantic motifs.

Pagliacci derives not from any literary source, but from an incident that composer Leoncavallo supposedly witnessed as a child in which a family servant was murdered by a professional clown who was incensed by a romantic entanglement involving his wife. Pagliacci means “clowns” in Italian, and the interplay of comedy and tragedy provide the basis for a bittersweet opera symbolized by the crying clown.

The fact that we are witnessing a circus troupe presents the opportunity for a grand spectacle, and this production does not disappoint. Set design and production of this opera is from a 1997 production by Franco Zeffirelli, known for his lavish stagings. When the circus arrives in town, somewhere in a vaguely 1950s Italy, we are treated to a riotous procession that involves over 100 performers. Confetti cannons explode while a decked out vintage Cadillac convertible rolls across the stage. There are colorfully costumed jugglers, unicyclists, acrobats, jesters and more, all competing for our attention at once.

Leoncavallo utilizes commedia dell’arte conventions in the characters, each of whom represents a (more or less) comic archetype familiar to Italian audiences. The dramatic structure involves a play within a play, with the comedy the circus troupe is staging mirroring the real-life drama behind the scenes. It is this mixture of comedy and tragedy, fantasy and reality that makes the opera so compelling.

Italian tenor Marco Berti as the cuckolded husband has a great presence and a voice to match. His version of the classic Vesti la Giubba (“on with the costume”) is the dramatic highlight. Other singers are excellent as well. Puerto Rican soprano Ana Maria Martinez conveys a torn, conflicted Nedda and she makes us feel her instability. Georgian baritone George Gagnidze is a commanding presence as clown narrator Tonio, and American baritone Liam Bonner sings beautifully as the doomed lover Silvio.

Maestro Domingo has a sure grasp on the orchestra, and the music mirrors the changing characters and situations extremely well, all the way to the dramatic climax. Pagliacci is one of the most accessible works in the repertoire, both musically and visually, so don’t hesitate to bring your neophyte friends to this double-barreled burst of operatic delight.