Good People at the Geffen Playhouse 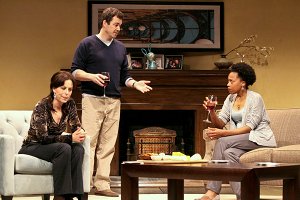 The strong cast of six is headed and fueled by Jane Kaczmarek as the unapologetic, take-no-prisoners, steamrolling Margie, a just-fired single mother of a grown-up mentally-challenged daughter living in South Boston.  Is she a victim of her own circumstances and environment? Or can’t the very proud Margie simply take responsibility for her many bad choices? Is Margie a scam artist? Or is she one of the “good people”?

Lindsay-Abaire’s tight script (with no extraneous words) features a number of unpredictable surprises in a fast-paced two-hour-10-minute production, and it’s a pleasure not knowing or guessing what’s coming next.  Director Matt Shakman gives the actors (and the audience) just enough time to breathe between thoughts. The vivid set designs of Craig Siebels smoothly and quickly convert from a store’s back alley to a cramped little kitchen to a bingo hall to a luxurious and spacious living room, and back.

Poor Margie! She’s at the end of her rope just having been let go from her minimum wage cashier’s job by her supervisor Stevie (nicely limned by Brad Fleischer who deftly balances his powerlessness with sympathy for Margie’s dire situation).  In Margie’s desperation, she verbally assaults Stevie’s manhood by telling him that word around the store pegs him as gay — because he likes to play bingo.

Fortunately (or not), Margie has a support team of sorts when she returns home — her landlady/babysitter Dottie (Marylouise Burke runs with all her delicious retorts and one-liners) and her good friend Jean (played by Sara Botsford with just the right snark and optimism to offset Dottie’s pragmatism).

When the ladies’ conversation on Margie’s limited job opportunities peters out, Jean changes the subject, casually mentioning her bumping into their high school classmate Mike, now a successful doctor (realistically and charismatically played by Jon Tenney). When Margie, thinking Mike could help her get a job, finally gets face-to-face with him in his uptown office, their niceties quickly disintegrate into dueling one-upmanship and grabbing the last word.  Overhearing Mike take a call discussing party arrangements, Margie gets herself invited to Mike’s mansion in an affluent Boston suburb.

Arriving at the party, Margie meets Mike’s wife Kate (Cherise Boothe is great with a lethal dig and the variety of emotions she’s unexpectedly put through.) Cases of mistaken identity occur (rather reasonably). Because of Margie’s appearance (dressed up for Margie), Kate mistakes her for a catering person.  Because Kate’s African-American, Margie’s taken aback that she’s actually Mike’s wife.  What starts out as an innocent evening becomes an all-out battle royale with Kate uncomfortably in the midst of it. Who does have the last word in this very explosive scene?  You’ll have to wonder by the looks on both Kate and Mike’s angry faces.

The final scene has Margie back in the bingo hall with her girlfriends, and her ex-boss at a nearby table.  The relentless Margie just cannot give up.  But a stunning reveal of information forces Margie to finally — what? Grow up? Take responsibility for her choices? Be realistic?

BRAVO to all involved!