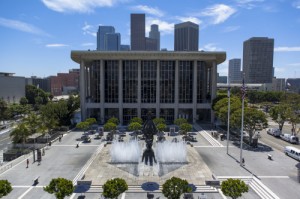 GRAND AVE ARTS: ALL ACCESS is also designed to welcome the Broad, recently opened, as it joins the arts pacesetters along Grand Avenue, which, since the Central Library’s dedication in 1926 and the grand opening of the Music Center in 1964 has become a magnet for many of Los Angeles’ most prominent cultural institutions.

* Architectural tours of the Broad, the newest addition to Grand Avenue, designed by Diller Scofidio + Renfro, which features two floors of gallery space to showcase the Broad’s comprehensive collection of postwar and contemporary art; and, on the plaza next to the Broad, musician Tim Hecker’s hypnotic and ethereal sound installation “Really Eternal Music,” a multi-channel sound piece that references La Monte Young’s classic minimalist drone music from the Black Record and, in keeping with Grand Avenue itself, reflects on our city’s prolific contribution to the arts;

* Fascinating behind-the-scenes tours of the Music Center’s Dorothy Chandler Pavilion, Ahmanson Theatre, Mark Taper Forum and Frank Gehry-designed Walt Disney Concert Hall, for which visitors will get the rare opportunity to see inside the auditorium;

* Center Theatre Group-sponsored family crafts and activities based on the play “The Sound of Music”; fun photo ops with theatrical puppets and masks from Center Theatre Group’s performance of the Mayan creation myth with an L.A. twist, “Popol Vuh: Heart of Heaven” created in collaboration with the internationally renowned theatre company El Teatro Campesino; and a “prize wheel” offering chances to win tickets and swag from the participating organizations;

* Screenings of award-winning short animated children’s films at REDCAT, CalArts’ downtown center for the contemporary arts, located inside the Walt Disney Concert Hall complex; a walk-through of the set for the upcoming production of Blacktop Highway by “unclassifiable” solo performer John Fleck, a journey into a darkly hilarious world that sets the mood for Halloween; and guided tours of the gallery exhibit “Hotel Theory,” exploring the possibilities of theory as an art form through a range of new work by emerging artists and seminal works by established artists;

* Los Angeles Central Library‘s enlightening exhibition “To Live and Dine in LA,” a collection of historic LA menus from the past century; and tours of the landmark 1926 library, which, along with its 72 branch libraries, serves the largest and most diverse audience of any library system in the nation;

* Guided tours of the Colburn School, which provides top-level performing arts education to students at all levels of development; and a performance by students of the Colburn Music Academy, the academic unit of the school that prepares exceptional pre-college artists for careers as well-rounded professional musicians.

In addition to these activities and more, many of the restaurants of the participating organizations are offering discounts on food and beverages (alcoholic and non-alcoholic), plus a fleet of food trucks parked by Grand Park provides other delectable dining options.

All events are free; reservations are not required.  For full schedule, please visit: grandavearts.tumblr.com or call (213) 972-8500.