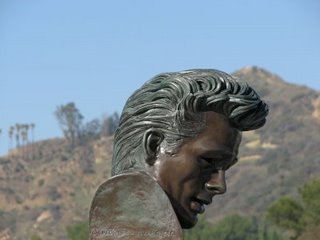 At the Griffith Observatory, you can find a bust of James Dean and a sculpture of Albert Einstein. The juxtaposition of these two famous, yet very different, figures is fitting for a landmark in LA since science and cinema both reign here.

Dean starred in the 1955 film “Rebel Without a Cause,” which features interior and exterior scenes shot at the Observatory, and the monument to his work is located outdoors where the Hollywood sign is visible on the hills behind it. The grounds of the Observatory and the views of the hills, the ocean (on a clear day), and the city are part of what make this place so incredible.

The Einstein statue sits on a bench in the Gunther Depths of Space exhibit gallery near the Leonard Nimoy Event Horizon Theater (Spock!). Sit down next to him to get a perspective on “The Big Picture,” the largest accurate astronomical image in existence (152 x 30 feet) created at nearby Caltech in Pasadena. It contains millions of stars and galaxies but represents only the amount of night sky that would be covered by Einstein’s finger held a foot from his eyes. 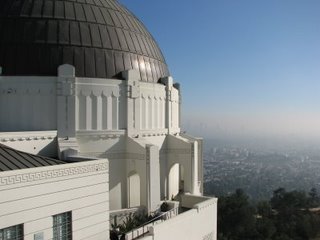 Another example of the meeting of science and entertainment is “Centered in the Universe,” the show that’s been at the Samuel Oschin Planetarium since Fall 2006 when the Observatory reopened after extensive renovations. With the most advanced star projector in the world, one of the largest domes (75 feet), a 3-D digital film, and live narration, the show lives up to Hollywood-size expectations.

“Centered in the Universe” takes the audience through time and space, with graphics that will blow you away (or make you think the room is spinning), even providing a glimpse of the Big Bang. Executive Producer Ann Hassett, who with husband Bob Niemack has produced numerous award-winning documentaries, told me back in 2007 when I saw the show twice (before returning again just recently): “We were in the middle of Hollywood, and they [the Friends of the Observatory and Director Dr. E. C. Krupp] didn’t want it to be seen as just another dusty, old educational film.” They got it right. It’s exciting, thought-provoking, and thoroughly entertaining — almost like a Disneyland ride for the mind.