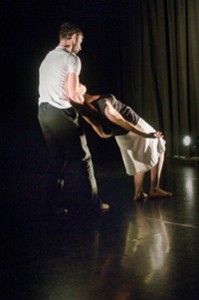 In “Leaving (and other rabbit tricks),” the second of four dances in this weekend’s Highways Performance Space event, Brad Culver and Genevieve Carson convey the insurmountable distance between two minds, and it is riveting.  Arianne MacBean’s choreography notes in the program simply give shared credit where due to her two performers.  It is pieces like these that place dance performance at the highest tier of human understanding.  Carson backs away from Culver with a smile so endearing that she magically disappears; there is an unnamable, unbearable tension resolved in embrace.  “Leaving (and other rabbit tricks)” is well-suited to a postmodern theme among the choreographers without moving itself to an artistic observation deck.  It is as present as its dancers.

Four-Headed Dance is a biennial installation, this the third, of works by noted Los Angeles choreographers.  This weekend’s program begins with a stage fairly littered with the thematic paraphernalia of “In Record Time,” Ilaan Egeland Mazzini’s new solo work.  Despite its heavy captioning in the program notes, “In Record Time” conveys a sort of removed sense of girlhood influences, Mazzini demonstrating hula-hoops and go-go boots, sexy housewife icons and an almost unhinged interaction with all eyes laid on her.  She is a captivating performer.  Furthermore, the highly presentational use of props, lights, costumes, and that crumbling fourth wall contrast beautifully with the simple MacBean approach that follows, speaking to the breadth and possibility of postmodern dance with that unnamable, undeniable Los Angeles quirk.

Intermission is followed by Carmella Hermann’s “Tuesday,” in Leah Piehl’s tidy and impressive, if apparently nonsequitur, costuming.  The score crab-walks and thoughtful-walks and inquisitive-walks Hermann around another littered stage; again, the high contrast of postmodern options is felt when the next piece, “Repeat After Me,” begins.  Three pairs of dancers refreshingly cross generational and cultural lines in vignettes that, though frustrating in their meandering, fairly capture the essence of selective social heredity.  It’s also nice to see from the program notes that the Los Angeles County Arts Commission is part of the show.