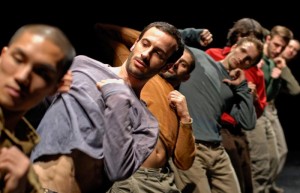 Watching Hofesh Shechter perform their U.S. premiere of Political Mother this past Thursday night strangely brought to mind two related scenes in the recent release of the remake of Footloose.

Ren, the main character of Footloose, is starting a petition to repeal the ban on public dancing in the small town where he has relocated to after his mother’s death. The high school senior is not only good at getting down, but he obviously identifies dancing as something that’s good for the mind, body and soul. For Ren, dancing in public also represents an act of youthful rebellion and freedom that should be a right for the town’s teenagers, who are instead monitored, controlled and treated as untrustworthy delinquents. One afternoon when frustrated by all of the slack he feels like he’s getting for being the new, big city, bad boy in the repressive town, he drives to an empty warehouse and dances wildly, “pouring his heart out” visually.

This type of emotional outburst marks the powerfully charged atmosphere of Political Mother. Artistic Director Hofesh Shechter’s first full-length piece opens with a samurai performing hara-kiri, and follows a stream of handsome, plainly dressed dancers twisting, throwing, lunging, shaking, jumping, and skipping as they careen on and off stage.