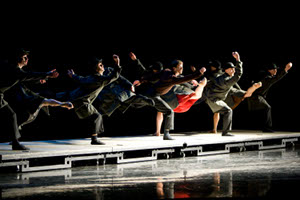 Hubbard Street Dance Chicago delighted audience members last night (April 9) at the Music Center’s Ahmanson Theatre, and based on recent statements by the company’s new artistic director, Glenn Edgerton, this three-day run may be a sign of good things to come for LA dance fans. Before accepting his current position in Chicago, Edgerton directed the Colburn Dance Institute at LA’s Colburn School of Performing Arts, and it sounds like his SoCal ties could develop into a continued local presence for the 33-year-old, internationally renowned, repertory-based Hubbard Street company. This weekend’s program also reflects HSDC’s new direction, offering works by three artists Edgerton often presented during his decade-long leadership of Nederlands Dans Theater: Ohad Naharin, Jirí Kylián and Johan Inger. I can only imagine the opportunity to see works by these acclaimed choreographers in a single concert, danced with nuanced power by the versatile Hubbard Street dancers, will whet LA’s dance appetite and ensure that our arts organizations keep this company in town as much as possible.

The show opens with a beautiful trauma. In Ohad Naharin’s Tabula Rasa (1986), searing strings by Arvo Pärt send victims reeling into relentless waves of reckless, tumbling dives. Here we see the tearing loss, and then we see the aftershock. First they fling limbs and fall into each other with desperate abandon, and then they rock gently, stunned – an ever-growing procession of mourners. Created before Naharin joined Israel’s celebrated Batsheva Dance Company as director and began development of “gaga” – a technique that allows movement impulses to originate from palms and balls of feet and other unexpected places and to flow uninterrupted through the body – Tabula Rasa reveals the roots of his recent work in Naharin’s remarkable gift for fluid, free-flowing movement. When they perform this piece, the Hubbard Street dancers share his gift.

Often hailed as one of the most influential choreographers of recent years, and described – like William Forsythe – as a deconstructivist of the classical ballet vocabulary, the Czech-born Jirí Kylián renders time and space unstable in 27’52” (2002). Named for the time it takes to dance, this pas de six heightens our attention to the passing of each moment as words and ticking gestures slip by, repeat, and play in reverse. One dancer arrests his partner’s flight in a series of in-between places. When he catches her in a horizontal hover, waist-high, instead of helping her launch into space, we get to grasp an exquisite moment of transition for several impossible seconds. But then others slide the sheets of marley flooring out from under them, and the duo has to scoot and chug just to stay on their feet. Last night marked the work’s West Coast premiere with Hubbard Street, and aside from a few spots where dramatic charge falls flat with flopping flooring, 27’52” distills our ever-off-balance existence to a richly insightful and potent physicality.

Walking Mad (2001), by Swedish choreographer Johan Inger, closes the evening with a crashing, hip-thrusting, heart-pounding, high-speed chase. A flock of grown men in party hats pursues women with adolescent energy; couples race toward and away from connection with insistent, heated grabs; and like Ravel’s “Boléro” that plays off and on throughout, the antics dance brilliantly around that illusive line between the slapstick and the serious. Inger’s work sings and bites with humor that darkens over time, and Hubbard Street is at its best.

Performances by Hubbard Street Dance Chicago continue tonight (April 10) at 7:30 p.m. and tomorrow (April 11) at 2 p.m. at the Music Center’s Ahmanson Theatre. Tickets are available through Ticketmaster Phone Charge at (800) 982-2787, at all Ticketmaster Outlets, online at www.ticketmaster.com, and at the Dorothy Chandler Pavilion Box Office. For groups of 15 or more, call CTG Group Sales at (213) 972-7231.