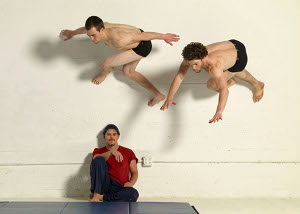 At the close of Friday night’s performance, an LA Improv Dance Festival director thanked the attendees, pointing out that the show had demonstrated where the art of improv dance has been going lately.  Jones Welsh (of Making Faces Productions) is correct.  From the blurry intentions of a meandering group demonstration to the spot-on dance culture accuracies of Scott Wells & Dancers, the first performance for the weekend measured the trajectories of a relatively new way to create dances.

Each concert presentation in iDfest is unique, although certain works repeated on Saturday night, and others in the Sunday matinee.  The range of approaches and presentations for improvised dance is almost bewildering.  The “Music/Dance Collaboration” that opened Friday night’s concert was arranged by Welsh and by Will Salmon, incorporating musicians and breaking the piece into sections by pulling curtains along the sides of the black box theater space.  But apart from a luscious interaction between a man and a trombone, the stage was packed and disorganized, calling into question the performers’ awareness of each other.  One- or two-man (or -woman, exceptions to the “(h)improv” theme this year) shows would crowd each other out, and the risk of improvisation as performance outweighed the reward.  The piece came across as an energetic classroom on display, and while the process of discovery and development is as crucial to improv as to any art form, it is not always inclusive to the audience.

The Platt Brothers, on the other hand, had choreographed their “Platt-Opus” quite precisely.  (It’s not entirely clear why they are in with the improv.)  But their antics are witty, and their cheer infectious.  They do extract a few bits from the Contact Improvisation toolbox (read: shared-effort acrobatics), and it’s plausible that improvisation played a part in their compositional process.  At the very least they elicited belly laughs from an otherwise chortle-prone crowd.  Their visits from San Diego will include a performance in Hollywood on Jan. 17, so perhaps it’s best to catch the trio in a more logical context.

Members of the San Francisco troupe Scott Wells & Dancers followed the brief intermission with “Call of the Wild,” a piece rightfully and pleasingly included in each of the iDfest performances.  Seven men move from one basic outline, or score, to another in much the same way as the initial “Collaboration” in the performance.  But the shared purpose of the ensemble is palpable, and even the most minor presentational gesture of everyone in near-matching pants makes for a cleaner, but no less innovative, display of works.  Some scores are apparent, some subtle.  The only segment not up to snuff with the rest is a trick show of those contact improvisation tools.  But the attitude in “Call of the Wild” ranges from observational wit to intuitive grace to what a group of very strong and playful men can accomplish with a wall and a wrestling mat.  There is even a congealing theme supporting the arc of the dance.  “Call of the Wild” has chosen its trajectory from the improvisational dance incubator, and its determined velocity is breathtaking.

Much like the first “Collaboration,” the Charlie Morrissey-orchestrated closure of Friday’s concert moved from one section to another with classroom basics for improvisation.  But while the first piece crowded too many stars on one stage, the last had a sense of private contemplation that all but excluded the audience.  A festival is for classes and performances, but without presentational energy, classes as performances can put a crowd to sleep.  The hush in the room may have been introspective, but distraction seems the more likely cause for quiet.

For better or for worse, each piece in Friday’s concert provided some insight as to where dancemakers are taking their improvisational roots.  Whether or not they shoot up from the ground varies piece by piece, but then, that is the nature of a fresh approach to dance.  In a period for the art where entertainment and alienation dichotomize, iDfest provides several middle grounds.

The third and final LA Improv Dance Festival performance is on Sunday, Jan. 10, at 4 p.m.  All workshop events take place at the Electric Lodge, a facility on Electric Avenue in Venice.  For more information on tickets, workshops in the festival, and other events from Making Faces Productions, visit www.idfest.org.  The closing improvisation jam is open to all, and will take place at 522 Santa Monica Blvd. in Santa Monica, beginning with a class taught by Charlie Morrissey at 6:30 p.m.