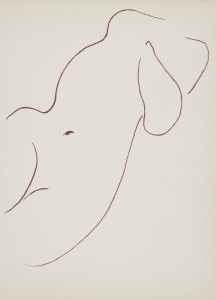 Henri Matisse was inspired by poetry, apparently so much so that later in his career he would not lift a paintbrush before reading some verse.

Lithographs from this “Anthology of Ronsard’s Love Poems” are currently on display at the Norton Simon Museum in Pasadena. The exhibit, titled “Matisse’s Amours: Illustrations of Pierre de Ronsard’s Love Poems,” continues through June 8, but National Poetry Month seems an ideal time to see it.

Considered the father of French lyric poetry, Ronsard (1524-85) brought the Italian sonnet and classical ode and elegy to the French. His romantic and sensual “Amours” (first published in 1552) are a natural match for Matisse’s love of painting the female form and flowers in a decorative, almost musical style.

Each of Matisse’s illustrations seems to flow in rhythm with the verse, communicating ethereal beauty with a few strokes of his brush. In one deceptively simple yet exquisite rendering, the artist created a sensual female body with only seven lines.

The Norton Simon exhibit includes 25 pages, spreads and folios, including a drawing of “The Birth of Venus” and one that visitors will recognize as resembling Matisse’s most famous painting, “The Dance.” To set the mood, Renaissance music plays softly in the gallery.

For the sonnet “Je veux pousser par la France ma peine,” Matisse illustrated Ronsard’s words with a mermaid on the surface of the ocean. Lounging with her arms behind her head and the clouds floating lazily above her, she seems to be casually oblivious of her seductive power. The poem (English translations are available in the gallery) reads:

I wish to drag my pain the length of France,
Faster than an arrow from the bowstring,
I desire with wax my ears to stop,
To no longer hear my siren’s voice.
I wish my two eyes to turn into a fountain,
My heart into a fire, my head into a rock,
My feet into a trunk, never to approach
Her so proudly human beauty.
I wish my thoughts to turn into birds,
My gentle sighs into new Zephyrs,
To broadcast the world over my complaint.
I wish the hue of my pale color
On the banks of the Loire to bear a flower,
Painted with my name and my misfortune.
(Translation by Michael Mills)

An illustration of two lovers in an embrace, with heads, arms and legs inseparably wound together in ecstasy, accompanies this song called “Plus estroit que la Vigne l’Ormeau se marie”:

More closely than the clinging vine
About the wedded tree,
Clasp thou thine arms, ah, mistress mine!
About the heart of me.
Or seem to sleep, and stoop your face
Soft on my sleeping eyes,
Breathe in your life, your heart, your grace,
Through me, in kissing wise.
Bow down, bow down your face, I pray,
To me that swoon to death,
Breathe back the life you kissed away,
Breathe back your kissing breath.
So by your eyes I swear and say,
My mighty oath and sure,
From your kind arms no maiden may
My loving heart allure.
I’ll bear your yoke, that’s light enough,
And to the Elysian plain,
When we are dead of love, my love,
One boat shall bear us twain.
(Translation by Andrew Lang) 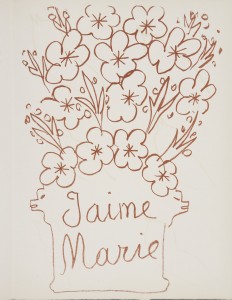 Matisse created more than a dozen “livres d’artiste” in his lifetime. For the “Amours de Ronsard,” he selected and updated the text, chose the typeface, and designed the layout in addition to illustrating the poems. His seven-year undertaking was interrupted during World War II when his wife was imprisoned by the Germans and his daughter was captured and tortured – adding poignancy to an already evocative work of art.

The exhibit is small enough to savor and still have plenty of time to explore the rest of the Norton Simon Museum, a treasure trove of European and Asian art. Just past an amazing room of Van Gogh paintings and Degas sculptures are some colorful canvases by Matisse, featuring sensual women, elaborate patterns and floral motifs, including “Odalisque with Tambourine (Harmony in Blue)” (1926), “The Black Shawl (Lorette VII)” (1918), and “Nude on a Sofa” (1923).