‘In Search of Blind Joe Death: The Saga of John Fahey’: Reminiscences and a Review 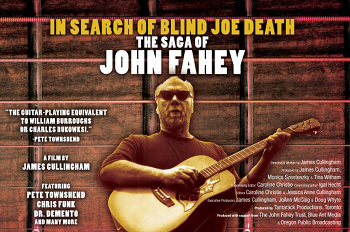 "In Search of Blind Joe Death: The Saga of John Fahey" is a new documentary written, directed and produced by James Cullingham.

Although I hate to admit it, I have known about the iconic American guitarist/composer John Fahey and played his music on the guitar for more than 40 years. So, I’d like to begin my review of the documentary “In Search of Blind Joe Death: The Saga of John Fahey,” written, directed and produced by James Cullingham, with some personal reminiscences.

I started playing guitar when I was 13, largely because of Elvis Presley followed by The Beatles, and even though I started out with a cheap acoustic guitar (a Silvertone), I mostly played electric guitar, thanks to the British Invasion. But during my junior year in high school, I came into possession of a Gibson acoustic guitar said to have belonged to Gene Autry — from a friend whose father worked for American Airlines. Apparently, the guitar was damaged by the airline, and for some reason Autry no longer wanted it. Because of that, and because within a couple of years I would no longer regularly be playing in bands, I began playing acoustic guitar more and more.

When I was a senior in high school in 1969, I was introduced (I don’t remember by whom) to a couple who were at that time probably in their 20s. They would invite high school kids over to their apartment and play music and provide food and drinks, and I remember that I thought they were cool. In any case, after we had begun to establish what I thought was a friendship, I learned that they were trying to convert us to Christianity. At that point, I ended my involvement. However, in one way, they forever changed and influenced my life because one of the musicians whose records they frequently played was Fahey.

After I graduated from high school in the lower 25 percent of my graduating class of about 700, my parents, who were exasperated by my poor performance for years in school despite my apparent potential, decided — in their naïvete— to send their long-haired guitar-playing son to a two-year boys’ college in Menlo Park, Calif., just down the road from the psychedelic San Francisco music scene. The school, Menlo College, promised to take underachieving boys and transform them into candidates for entry in the school next door — Stanford. However, instead of spending time studying, I spent most every weekend going to concerts at the Fillmore and Winterland and playing my guitar.

One of the other students at Menlo College was one of the Lilly pharmaceutical clan. I remember two things about him other than his wealth: he used cocaine long before it became fashionable, and he was a really good finger picker who had a beautiful Martin D-45 guitar. So I asked him to teach me the basic three-finger picking pattern. I remember sitting in my dorm room for hours practicing that pattern until it became automatic. Then, I put Fahey’s “The Transfiguration of Blind Joe Death” on the turntable and began learning the songs. The process was arduous and took hours every day. By the end of the first semester, my GPA was a dismal 1.3, but I had learned most of the songs on that album, and a few more, some of which I continue to play to this day (e. g., “Brenda’s Blues,” “Spanish Dance,” “How Green Was My Valley,” “In Christ There Is No East or West,” my own rendition of “Bicycle Built for Two,” etc.). I even got a chance to see Fahey play at a small venue, but, alas, for some reason that night I had decided to take psilocybin (Hey, it was 1969!) and was in no condition to appreciate the concert, a decision I still regret.

I continued to buy Fahey albums, and when I bought “The Yellow Princess” and played the title track, I was blown away. The songs on that album were different in many ways from his previous work. He stated on the liner notes that he thought they were his best songs to date. As with the other songs, “The Yellow Princess” was more melodic (perhaps because it was based on a piece by the classical composer Camille Saint-Saëns) and more technically challenging than much of his earlier work. I had to learn it. After many hours of lifting up and putting down the needle of my record player, I finally mastered it. I don’t play it much anymore, but I still remember most of it.

Since then I have continued to play finger-style acoustic guitar, including the Fahey songs I learned back in the late ’60s and early ’70s, and I compose my own. One of the most recent finger-style songs I composed is actually titled “Homage to John Fahey,” written after I learned of his death in 2001. And that brings me to the movie.

I am glad that someone has made a documentary of Fahey, and “In Search of Blind Joe Death: The Saga of John Fahey” is satisfying on so many levels. The film includes the requisite commentary by others who worked with and knew him, including a former wife, musicians, engineers and producers, all overlaid on many of Fahey’s tunes with scenes of the places Fahey lived. Among the prominent musicians interviewed are Pete Townshend and Stefan Grossman.

The film intersperses these commentaries with audio and video footage of Fahey himself and excerpts from his prose read by both Fahey and Cullingham. Cullingham superimposes some very creative animation inspired by Fahey’s songs and writings, most notably of turtles, which featured prominently in Fahey’s own artwork and stories. The end result is a very imaginative work that sets a new bar for documentary filmmaking.

The film traces Fahey’s life from his childhood outside of Washington, D.C., to his move to Los Angeles to attend UCLA, to his relentless search, especially in the Mississippi Delta in the turbulent 1960s, for recordings by black country blues musicians, and in some cases (e.g., Skip James and Bukka White), the actual musicians themselves. He was also instrumental in reviving and promoting the legacy of the bluesman Charlie Patton whom Fahey rates as a more important figure historically than Robert Johnson. The title of the film is borrowed from a Fahey album; Blind Joe Death was a fictional blues musician created by Fahey, who made him blind because so many of the early country blues musicians were.

The film also documents Fahey’s alcoholism and hints at a major cause of not only that but his gradual decline leading to his early death: sexual abuse by his father when Fahey was a young child. In the end, we see Fahey’s sad last days living unkempt as a recluse in a shoddy, cluttered motel room in Oregon. He died at the age of 61.

The film succeeds in conveying how Fahey didn’t just establish a uniquely American style of guitar playing but also a brand new genre of music, described as American Primitive, a label which Fahey himself endorsed.

The film also points out how Fahey was ahead of his time in establishing his own record label to record and promote his music as well as the music of other musicians who found it difficult to get record contracts from more established labels. In fact, Fahey didn’t have such a great experience with one such label — Vanguard — the label for arguably two of his best albums, including “The Yellow Princess.”  Cullingham also notes that Fahey was a maverick in his recordings, even some of his early ones, which included real-life sounds, such as a barking dog (“Poor Boy”) and a singing bridge (“The Singing Bridge of Memphis Tennessee”  — yes, in Fahey’s world bridges sang).

The film deftly takes the viewer on a journey of Fahey’s life — presenting a true saga of a hero of American folk music — and painting a portrait of yet another tortured artist. One of the commentators in the film suggests that had Fahey known he would die at 61, he still would have chosen the same life. Such a statement, however, assumes that we choose our lives. Certainly, Fahey didn’t choose to be abused. Nevertheless, as with many artists, Fahey’s torment resulted in a legacy of music that has enriched the lives of many, including me.

Cullingham’s documentary helps to ensure that a whole new generation of music lovers will know about Fahey and his music. “In Search of Blind Joe Death: The Saga of John Fahey” is a tribute to a musical icon and is a vital contribution to music history, preserving the story of a major American guitarist, composer, musicologist and innovator.

“In Search of Blind Joe Death: The Sage of John Fahey” is showing in theaters as a “Guitar Innovators” double feature with “Approximately Nels Cline,” a film by Steven Okazaki. For more information, visit www.firstrunfeatures.com/guitarinnovators_playdates.html. Also, YouTube has several videos of Fahey.