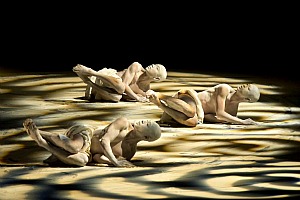 Returning to Royce Hall after a nine-year absence, the highly acclaimed Sankai Juku takes the stage at the Center for the Art of Performance at UCLA for two performances this Friday and Saturday, Oct. 16 and 17, at 8 p.m.

“UMUSUNA-Memories Before History” roughly translates from Japanese to mean something that includes one’s place of birth, everything and nothing and the soil of one’s native place. Similar to the title, this abstract work incorporates unfamiliar yet recognizable shapes, dramatic lighting, an atmospheric sound score, a slow pace of movement (Butoh) and a half-dozen or more hairless performers (all men) in white body makeup.

This 2012 creation is choreographed and designed by company founder and artistic director Ushio Amagatsu. Butoh is described by this innovator as a sometimes-slow-motion “dialogue with gravity.” The creator’s striking images and inventive physical language have been recognized globally as universally expressive, and his unique mix of theatrical elements — movement, sound, visuals — render a grippingly hard-to-describe visceral and at times gut-wrenching beauty — or ugliness.

Though currently based in Paris, the company makes all too few appearances in North America. We have our own American Butoh explorers here, but this 40-year-old establishment sets the high standard for originality in the form.

Royce Hall is located at 340 Royce Drive, LA 90095. Tickets are $29-$89 and can be purchased at cap.ucla.edu, all Ticketmaster outlets, by phone at (310) 825-2101 or in person at the UCLA Central Ticket Office located in the southwest corner of the James West Alumni Center. Student rush tickets, subject to availability, are offered at $15 one hour before show time to all students with valid ID. UCLA faculty and staff tickets are $25 while supplies last. More info at http://cap.ucla.edu/calendar/details/sankai_juku_2.