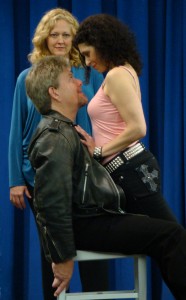 The May 17 performance of “La Tragedie de Carmen” by the Intimate Opera Company rocked in the recently renovated Gold Room of the Pasadena Civic Center – and not just because there was an earthquake at 8:39 p.m. This show, the last of six performances across three venues, was another well-polished production from the Duarte-based company founded by Wendy Kikkert.

“La Tragedie de Carmen,” awarded the 1984 special Tony Award for Outstanding Achievement in Musical Theatre, is English stage director Peter Brook’s highly distilled, 80-minute twist of Prosper Mérimée’s 1845 story and George Bizet’s 1875 opera. Director Mark Lamanna’s setting translated Seville to a contemporary urban street on a waterfront pier near a police station. The bullring became an auto racetrack, and the innkeeper Lillas Pastia’s place was a biker bar. The set was minimal with only two chairs and a table, and the lighting was sparse with little specific shading for the individual scenes.

Geeta Bhatnagar-Novotny was genuinely enchanting as Carmen, seducing the audience along with each of her operatic victims. She integrated her voice with an alluring rhythm and movement that masterfully conveyed the meaning between her lines. Bhatnagar-Novotny does not have a huge voice, but she sang beautifully as she revealed the evolving depth of her fey character.

Susan Kane was believable as the sweet, sincere home-girl Micaëla, and left a great first impression in the opening scene with her crystal-clear voice and impeccable technique. Her final aria and duet with Bhatnagar-Novotny was among the finest in the production and served to elevate her role to the attention it deserves in the plot.

Christopher Campbell was Don José, the reliable cop in the underbelly of the city who is hopelessly in love with Carmen and unable to cope with her. He and Bhatnagar-Novotny had a particularly hot scene after Carmen’s fight with Micaëla where he tethered her with a collar and leash. Campbell’s solo after his jealous quarrel with Escamillo was the highpoint of his performance; his voice was emotive and even-tempered throughout the range. It was a moving aria that literally shook the room (there was a 4.7 earthquake!), though Campbell’s focus was unflustered.

James Martin Schaefer’s Escamillo won over the audience immediately with his clear and full voice. His dashing bravado and outstanding vocal technique made an understandable target for Carmen’s attention, and the sparks between them were obvious. His role as an auto race driver was a novel spin, especially with the head of a bull emblazoned on the back of his leather jacket. Escamillo’s death, however, was obscured to the audience as his helmet was solemnly paraded in front of the stage, but not visible beyond the first few rows.

Hervé Blanquart served as both Zuniga, the police lieutenant, and Garcia, whose unfortunate role was to find his wife, Carmen, sleeping with Don José. Blanquart had a strong voice, and his stout portrayal of both characters was faithful to the story.

Paul Lacey played Lillas Pastia, the tattooed bar-keeper and gypsy sage, and although his was not a vocal part, he was a significant presence. His additional duties found him pimping, disposing of bodies, and doubling as a spiritual guide.

Conductor Kristof van Gryspeer capably pulled off the reduced orchestration, whittled down to 14 musicians with one instrument from each section of Bizet’s original. The balance and cohesion of the ensemble was great and the diverse instrumentation marinated into a warm, spicy undertone. The orchestra situated behind the stage blended well with the singers, but caused Van Gryspeer to conduct in a contorted stance trying to coordinate the singers and the music; there was no other option. The bassoon theme played by Rebecca Rivera was a particularly nice accompaniment as Zuniga returned, and the wedding scene with harp and flute was beautifully performed by Alison Balbag and Johanna Borenstein providing a touching respite from the chaos and tragedy. Percussionist Daniel Kaminsky was great on Bizet’s eidetic tympani motives.

Lamanna’s English narration was judicious and helpful for interpreting the French text sung without subtitles. Although Lamanna let the singers be somewhat physical, the stage was quite small, limiting their action. However, the singers did squat, recline, run, jump, fight, and even lap dance, without missing a note. The fight scenes among the men lacked intensity, being somewhat stylized and overly choreographed and lacking the energy of fights to the death. Carmen put on a good fight though – that one was believable.