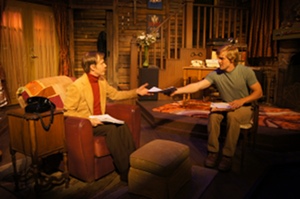 The current re-mounting of Ira Levin’s “Deathtrap” at the LA Gay & Lesbian Center’s Davidson/Valentini Theatre ranks as one of the best technically produced productions in Los Angeles; comparable with, and even surpassing, the production values of major theater venues.

Luke Moyer’s effective variance of mood lighting, fireplace burning and lightning flashes add immensely to the tautness and immediacy of this mystery.

The love that dares not speak its name — what was only suggested in the original 1978 version of “Deathtrap” — gets explicit exhibition in this new remounting. The five-person cast of capable actors features two stand-outs: the hunky Burt Grinstead as Clifford Anderson, the promising writing student of the once-successful playwright Sidney (Brian Foyster), and the scene-stealing Elizabeth Herron as next-door neighbor/psychic Helga Ten Dorp.  Others in the cast include Cynthia Gravinese as Sidney’s wife Myra and Stephen Mendillo as Porter Milgrim, the Bruhls’ attorney.

“Deathtrap” is one of those theatrical thrillers with major plot twists better not spoiled, but experienced.  So only the beginnings can be revealed in this review.  Sidney teaches playwriting seminars. One eager student, Clifford, mails him his first script to critique. Sidney shares with his wife how wonderful he thinks Clifford’s first attempt at playwriting is. He invites Clifford to their cottage to discuss his script.  Then Clifford arrives…

Performances continue through May 6 at the L.A. Gay & Lesbian Center’s Davidson/Valentini Theatre, The Village at Ed Gould Plaza, 1125 N. McCadden Place, Hollywood. Show times are Fridays and Saturdays at 8 p.m. and Sundays at 7 p.m. For tickets, visit www.lagaycenter.org/theatre or call (323) 860-7300.