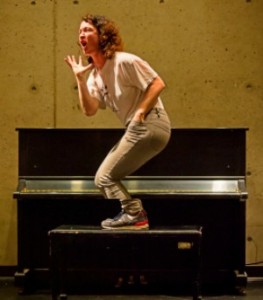 Jeanine Durning is one ferocious dancer. Over the years, she’s enlivened the work of a diverse group of experimental dance makers in New York and was recently seen on the Royce Hall stage in the work of Judson Church choreographic innovator Deborah Hay. Internationally, she has served as a consultant to the Motion Bank, a project conceived by William Forsythe and run by his German company. This Friday and Saturday, May 12-13, at 8 p.m., and Sunday, May 14, at 3 p.m., she’s bringing her one-woman performance work, “inging,” to Automata in Chinatown.

Presented by the Los Angeles Performance Practice (LAPP), the evening is described in promotional materials as an “intimate exploration of rarely charted territory at the intersection of thought, language and action.” An Alpert Award-winning artist, Durning includes an onslaught of spoken word, dance, dream, biography and meditation in this acclaimed solo. The “performer and audience co-exist in perpetual disequilibrium, confronted with the limits of language, and the body as a bridge between thought and the world.”

Expanding our ideas of what dance can be, this is an opportunity to witness an inquisitive movement-based artist explore an in-the-moment storm of excitement with no known outcome beyond a rush of creativity.

Hang on to your seats.