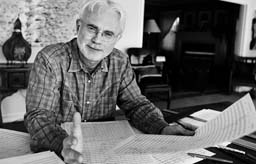 I’m not sure what I expected. As someone who has listened to and studied classical music as a pianist and a singer, I am acquiring a taste for 20th-century and contemporary music late in life. Because I am still striving to apprehend this foreign territory, I am in awe of composers such as John Adams. I recall being deeply affected by Nixon in China when LA Opera performed it 20 years ago. I was curious to discover what a composer would be like in person whose music is powerful enough to resonate in my memory.

The “John Adams in Conversation & Concert” event was a collaboration between Long Beach Opera and the Los Angeles County Museum of Art. It was a refreshing privilege to witness this event unfold at the Bing Theater on Feb. 1. The composer could have stepped off the campus of any Ivy League university, thoughtful and articulate, unpretentious and compassionate, at home in his Dockers and jacket in muted fall tones. Andreas Mitisek, equally comfortable in his adopted California jeans and sneakers, guided the discussion with wit and charm. Mitisek, the artistic director for Long Beach Opera, will conduct performances of Nixon in China in March.

Adams explained how stage director Peter Sellars approached him about composing the work at a time in his life when creating an opera had not even occurred to him. He was intrigued how Sellars could hear the potential in his music long before he did. When Adams decided to take on the project, with librettist Alice Goodman, he jumped in the deep end. He delicately described what was then called the need for “amplification” — what we now dub “sound design.” Basically, his orchestrations were not friendly to the singers, and they needed to be miked.

He elucidated the difficulty in choosing an opera subject. From our perspective, we can listen to the operas of Verdi, Puccini and Wagner and understand that the people in these operas are not “real” people — even historical subjects, as with Shakespeare, need to be understood as archetypes, as representational characters. When choosing a contemporary subject, the audience may have more difficulty separating their perception of the “real” people from the symbolic. Perhaps with more distance, Nixon in China has a greater chance of communicating its underlying themes than it did 20 years ago. I am looking forward to finding out if this is true in March.

In between conversations, we were treated to excerpts from the opera, sung by members of the cast. Jeremy Huw Williams performed the affecting “News Has a Kind of Mystery,” Richard Nixon’s aria. This was followed by Suzan Hanson’s mesmerizing interpretation of “This is Prophetic,” Pat Nixon’s aria. Adams discussed the choice of the coloratura soprano in the cast, likening the wife of Mao-Tse-Tung to the Queen of the Night. Ani Maldjian brought the house down with her rendition of “I Am the Wife of Mao-Tse-Tung!” The opera ends with an introspective aria, sung by the character of Cho En-Lai looking back on his life. Roberto Gomez sang this piece, “I Am Old,” with earnest tenderness.

After a brief intermission, we experienced a thrilling performance of an early composition, Shaker Loops, in the version for string septet. The players performed the work in the fall as part of Jacaranda Music’s chamber music series. The work is in four movements, two energetic outer movements framing two inner, quiet movements. Oscillating patterns begin in the violins, gradually augmented by other strings. The outer movements build in intensity, in both cases reminding me of the driving rhythm of a locomotive picking up momentum. The more peaceful inner movements employed similar “looping” techniques, but with calmer effect. The relentless drive to the final climax was amazing to witness.