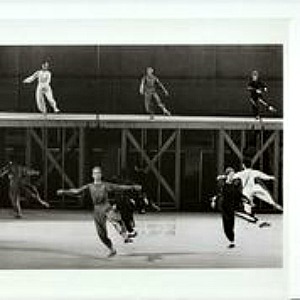 Celebrating the 31st anniversary of the production that opened the Temporary Contemporary (Geffen/MOCA) back in the day, composer John Adams (the LA Philharmonic’s Creative Chair), groundbreaking dance maker Lucinda Childs and set designer and Disney Hall architect Frank Gehry are bringing “Available Light” to Disney Hall this Friday and Saturday, June 5 and 6, at 8 p.m.

With re-imagined choreography, a newly designed set and the original taped score, this co-presentation of Glorya Kaufman Presents Dance at The Music Center, the LA Phil and a handful of other national and international presenters is part of the “Next on Grand: Contemporary Americans” music series. After the performance on opening night, the three renowned artists will discuss the evolution of their collaboration three decades ago in “Creators in Conversation.”

Highly praised during its premiere engagements in the eighties, this mixture of the arts is being revived to inform a new generation of dance and music lovers of the power of what was, at one time, called minimalism. As viewers saw back then, the abundance of movement, the richness of the score and the evocative nature of Gehry’s stage designs are anything but austere. Each of the three elements — movement, sound and the visual picture — is supported by a thick palette of ideas, matured even more with the passing of time and the innovators’ subsequent experience.