Judd Hirsch in “Freud’s Last Session” at the Broad Stage 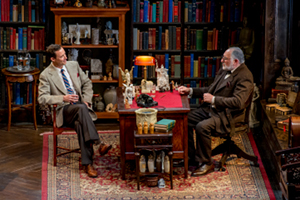 It is Sept. 3, 1939. Hitler’s invasion of Poland has just unhinged the entire world. Great Britain has this day declared war on Germany. The voices of Prime Minister Neville Chamberlain and King George VI crackle through the radio. The Jewish Sigmund Freud and his daughter, Anna, have recently arrived in London, having barely escaped Nazi persecution with their lives.

Summoned to Freud’s consultation room, a young C. S. Lewis (author of “The Chronicles of Narnia”) arrives late, somewhat nervous about his savage parody of Freud in a recent publication. The great atheist and the great Christian mystic face off, circling like two prizefighters. Freud’s study broils under the molten midday sunlight pouring through a wall of windows. Air raid sirens wail, and the world burns. Freud — in agony from his rapidly advancing terminal cancer, and making final preparations for his assisted suicide two weeks hence — and Lewis — still suffering periodic throes of WWI-induced PTSD — begin what promises to be a blistering debate on no less monumental a topic as the existence of God.

Given the subject matter, the long and successful run of this play off-Broadway, its subsequent award-winning productions around the United States, and the presence of Judd Hirsch as Sigmund Freud, I took my seat in hot anticipation.

How disappointing that the promised fiery theological-pyschosexual dialogue between two of the 20th century’s intellectual titans quickly becomes a tepid stream of platitudes and aphorisms and a few fart jokes.

In a career spanning more than half a century, Judd Hirsch has become an American icon. His work in theater, TV and film has earned the highest accolades, including Tony and Emmy awards and Oscar nominations. As Freud, Hirsch manages to humanize the flawed giant, while relinquishing none of the fabled narcissism. His Freud is at once lovable old Jew, brainiac, warrior and manipulatively abusive father to Anna.

In the role of recent Christian convert C. S. Lewis, Tom Cavanaugh seems oddly miscast — he is competent and likable, although clearly fighting above his weight class. His mannered acting style grates after awhile, and the English accent tends to wander, even disappearing on occasion.  The Emmy-winning actor is perhaps best known as the title character in NBC’s “Ed.”  ’Nough said.

It is obvious that no expense was spared on this production. On entering the theater, the audience is greeted by a sumptuously detailed consulting room, replete with library, a vast collection of ancient mythological figurines and Freud’s famous tapestry-covered couch, courtesy of scenic designer Brian Prather. Lighting designer Clifton Taylor illuminates the proceedings with exquisite detail. Beth Lake’s sonic design includes everyday household bustlings and barkings, as well as the enormously evocative WWII-era radio broadcasts and horrific air raid sirens followed by deep, unsettling silences.

Even if St. Germain’s “Existence of God” debate doesn’t rise to the level of Cormac McCarthy’s exploration of the same material in the searing “Sunset Limited,” the prospect of watching Judd Hirsch’s masterful work close-up in the intimate Broad Stage is worth 80 minutes of your time.