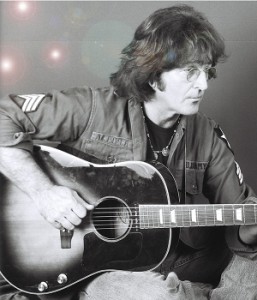 Tim Piper is John Lennon in "Just Imagine" at the NoHo Arts Center.

Tim Piper is John Lennon reincarnate in the new show, “Just Imagine,” which had its world premiere Oct. 9 at the NoHo Arts Center. Because Piper looks and sounds so uncannily like the legendary Beatle who was killed in 1980 at the age of 40, there is no need to imagine anything. You just get swept up in the music.

Piper and his Working Class Hero band of Greg Piper (bass/musical director), Don Butler (lead guitar), Don Poncher (drums), and Morley Bartnoff (keyboards) perform Beatles and Lennon songs (including “Revolution,” “Help,” “Come Together,” “Strawberry Fields,” and, of course, “Imagine”) and snippets from others. The show is essentially an hour-and-a-half concert, and the intimate NoHo Arts Center is a dream venue for it, one in which we are up close with the band and yet never blasted out of the room. If you’ve been watching all the Beatles movies and documentaries on VH1 in celebration of the Sept. 9 release of the remasters, this live show will be the icing on the cake.

Lennon’s anecdotes throughout the show – including inspirations for songs, emotional confessions, and straightforward history (all exceedingly well-written by Piper) – add another level of appreciation to the music. They also heighten that underlying poignancy that this is it – Lennon is gone and Piper and his band can only bring him back to life for a moment.

Piper’s acting is flawless; he channels the former Beatle, as he shares Lennon’s life story and that of the Beatles, an emotional journey from parentless youth to international celebrity and then, more importantly, to happy husband and father. Steve Altman (actor, comedian, songwriter, and theater and film director) directs Piper’s one-man show to great effect; there is a definite sense of drama as the show winds toward its inevitable conclusion.

Piper, who has been with Beatles and Lennon tribute bands for more than 20 years, has Lennon’s voice down, and he uses his instrument to its fullest. For instance, “Mother,” which Lennon wrote while participating in primal therapy and is full of screaming, is not just amazing as you hear it, but also afterward as you wonder how he does this three days a week for this show, not to mention how many times he’s done it over the years with his tribute band.

The band is airtight and a thrill to hear. Piper and Working Class Hero pull off songs that the original band never performed live (The Beatles stopped touring in 1966 before “Sgt. Pepper’s Lonely Hearts Club Band.”). Their performance of “I Am the Walrus” rocks hard; it’s absolutely incredible to hear live and worth the ticket price alone.

During various anecdotes and songs, videos are projected on the wall above the band in a concert-ticket frame: clips from Beatles movies, photographs from the Vietnam War, the band’s introduction on the “Ed Sullivan Show,” and other wildly varied video. Black-and-white footage (with added psychedelic colors) of rock icons who died young reminds us that they are forever frozen in time, and we can’t help imagining what they would sound like now, what kind of songs they’d be writing, what they would say. That’s why “Just Imagine” is so powerful. You’ll leave with the strong feeling that you just saw Lennon, and didn’t just imagine him.