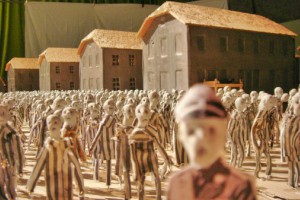 Continuing its mission of bringing exciting new theater, dance and music to LA audiences, the Roy and Edna Disney CalArts Theater hosts the local premiere of “KAMP” this week. Performances run Thursday through Saturday, Sept. 20-22, at 8:30 p.m. and Sunday, Sept. 23, at 7 p.m.

Created in 2005 and already seen and celebrated across the globe, the Dutch performance collective Hotel Modern builds a miniature concentration camp on the stage. It’s filled with meticulously rendered scale models of buildings, transportation lines and thousands of tiny figurines. Then, visual and performing artists Pauline Kalker, Arléne Hoornweg and Herman Helle move things around in a place much like where Kalker’s grandfather spent his last days, the Polish/German concentration camp in Auschwitz.

Live feed video projections of the detailed action bring us into the environment to experience the unspeakable elements of the war. Though described in promotional materials as “wordless object theater,” audiences have been “awestruck and profoundly moved” by this “posthumous memorial for Kalker’s grandfather and millions of others.”

It may be a depiction of a situation almost 80 years old, but its connections to the present are “eerily reminiscent.”