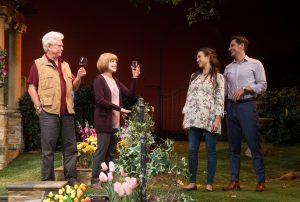 Karen Zacarías takes issues like racism, sexism and ageism and tangles them all up in “Native Gardens.” Fortunately, it’s a rollicking comedy with a happy ending. The play continues at the Pasadena Playhouse through Sept. 30. Former “Seinfeld” star Jason Alexander directs.

The first thing you’ll notice when you walk into the playhouse is the elaborate set design by David Meyer. On one side is Frank and Virginia’s garden, featuring a massive stone patio with columns and perfectly manicured beds of hydrangeas, tulips and all sorts of other non-native plants. Pablo and Tania have just moved into the fixer next door with a 300-year-old oak tree, unkempt shrubs and garden gnomes. They need to fix the yard up fast because Pablo invited his entire law firm to a party in six days.

Frank and Virginia are white, well-to-do professionals nearing retirement. Pablo and Tania are expecting their first child. Pablo is a Chilean immigrant and lawyer, and Tania is a doctoral candidate whose family goes back generations in New Mexico. You can see the jokes coming, right?

The two couples have very different ideas about the world, which comes through as they get to know each other and talk about gardens. Tania believes that a native garden is the way to go, while Frank and Virginia see those plants as weeds and hate the oak tree that drops leaves all over their meticulous yard. Frank has been trying to win the neighborhood garden club competition for years. But things really get serious when Pablo and Tania discover that Frank and Virginia’s garden extends two feet past their property line.

A lot of biases come out as the neighbors sling mud back and forth, and it’s all highly entertaining. Fantastic up-and-coming young players Christian Barillas and Jessica Keraz hold their own with top-notch, big-name actors Bruce Davison and Frances Fisher. With fast-paced dialogue, ninety minutes fly by like the days and nights in the play — which are cleverly indicated on signs by three hilarious gardeners (Julian Armaya, Bradley Roa II and Richard Biglia) who dance into the gardens between scenes. Unfortunately, the ending comes too abruptly and is far too neat and tidy, and that undermines the peaceful resolution at the end.

I have to add that I was struck by the pre-show entertainment. The three gardeners (who never speak in the play) come on stage right before show time carrying a boombox with music playing and start working in Frank and Virginia’s garden. They talk quietly with each other and then start to notice the audience. They look to see if anyone notices them and wave to those who do. They call a woman in the front row up to the stage to pose for a selfie with them. But for the most part, no one pays any attention to them — a little social experiment that fits in nicely with the themes of the play.