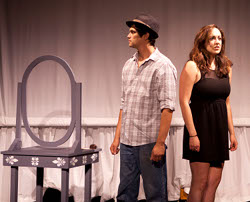 The KBP Theatre Group is very lucky to have such powerful singers as Kate Bowman and Juan Lozano for their inaugural production of Tony Award-winning songwriter Jason Robert Brown’s “The Last Five Years.” With The Five Years Trio so over-miked, anything less than Bowman’s and Lozano’s strong voices would not be heard or intelligible in the tiny Hudson Guild Theatre.

“The Last Five Years” chronicles the life of under-employed actress Cathy (Bowman) and author-on-the-rise Jamie (Lozano) as they meet, court, marry and struggle. In a clever use of staging, their dancing counterparts, always behind an elevated white scrim (the expressive Daniel Johnson and talented Macy Reyes), dance out the true, sometimes contradictory emotions of the singing couple. Kudos to Steven Nielsen’s choreography.

Moments of Bowman’s sly playfulness and fun get a chance to shine through when the Trio amps down in “See I’m Smiling” and in her audition song, “Climbing Uphill.”

Lozano is at his funniest and most relaxed in his comedy solo, “The Schmuel Song” (the Trio’s not full-blast for this song either).

It must have been the small-theatre budget that had Bowman and Lozano moving their respective stage furniture between songs, instead of stagehands. I would love to experience this show again when the two talented singer/actors don’t have to constantly compete with the very loud accompaniment. However, Peter Darling does conduct his Five Years Trio with wonderful musicality.

Performances continue through Oct. 6 at the Hudson Guild Theatre, 6539 Santa Monica Blvd., Hollywood 90038. Show times are Thursdays through Saturdays at 8 p.m. For tickets, visit www.PLAYS411.com/fiveyears, or call (323) 960-5521 for reservations.