Kirk Douglas and His Namesake Theater 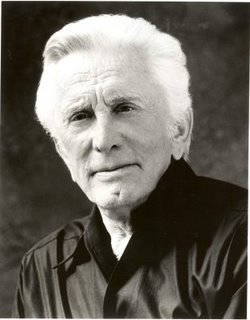 Not since the grand opening in 2004 of Center Theatre Group’s Kirk Douglas Theatre has the man it’s named for graced its stage. Since he didn’t perform that time, CTG Artistic Director Michael Ritchie has been waiting for Douglas’ return to the Culver City venue. That wish has finally been fulfilled, as the 92-year-old Hollywood legend will perform a new one-man show about his life, “Before I Forget,” directed by Jeff Kanew. Douglas has plenty of interesting material, which he has explored in a few autobiographies, starting with 1988’s “The Ragman’s Son.” Born in New York to Russian-Jewish immigrants, Douglas worked his way out of his familial poverty to become an Academy Award-nominated screen star with work in such films as “Champion,” “The Bad and the Beautiful,” and “Lust for Life,” as well as other classics like “Spartacus.” Douglas’ most recent memoir, “Let’s Face it: 90 Years of Living, Loving, and Learning,” was published in 2007.

“Before I Forget” is part of DouglasPlus, a series of theater events including readings and other minimally staged shows. A family show called “Darwin” on Saturday, March 14, at 10:30 am and 2 pm will feature the adventures of a scientist and his creation, “an electro-luminescent wire dinosaur” named after the English naturalist whose 200th birthday (Feb. 12) is being celebrated across the world. This hybrid of theater, puppetry, music and dance created by Corbin Popp and Ian Carney is free to Culver City residents (all others $20). Next up is Mike Daisey’s monologue, “How Theater Failed America” March 18-21, followed by Michael Sargent and Bart DeLorenzo’s world-premiere play “The Projectionist” March 26-28 and April 2-3, and then Matt Sax and Eric Rosen’s “Venice,” a hip-hop musical loosely based on “Othello.” Tickets to each of those shows are $20.

Kirk Douglas Theatre, 9820 Washington Blvd., Culver City 90232, (213) 628-2772, www.CenterTheatreGroup.org. The theater also has a great Lounge (with a full bar and food) that becomes a post-performance hang-out with DJs spinning tunes on Thursdays, Fridays and Saturdays.