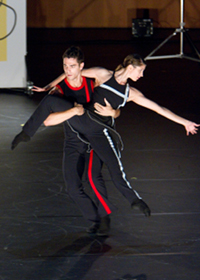 This weekend, L.A.’s dance devotees gathered at Walt Disney Concert Hall to see the premiere of L.A. Dance Project. Directed by Benjamin Millepied – former New York City Ballet superstar and highly commissioned choreographer known for his work on the 2010 film Black Swan – LADP was born out of financial support from The Music Center, and the group debuted with great expectations. Promoted as a curatorial collective that will become L.A.’s long-awaited world-class dance maker, the group (all New Yorkers transplanted for this project) has some things to prove to the L.A. dance dedicated.

While commitment to and investment in Los Angeles can’t be proven in a weekend, the program of works by choreographic giants William Forsythe and Merce Cunningham, as well as LADP’s own ambitious world-premiere collaboration, suggests the synergy of this group can do powerful things here.

Created as a last love letter to his late wife, Forsythe’s Quintett (1993) is a gift, and LADP offers it with generosity. As the gravelly voice in Gavin Bryars’ recording begins its shaky chorus of “Jesus’ Blood Never Failed Me Yet,” Nathan Makolandra takes up the theme in his body while the others watch, supporting him with their presence and attention. With a measured calm, he unfurls an arm and then crosses a leg – fingertips and toes pulling apart and twisting his torso in a gorgeous épaulement that engenders each next movement with sure inevitability.

Traveling toward the certain end together, we see this quintet develop into an exquisite community. At first, Julia Eichten’s persistent smiles and breathy releases seem cheerfully naïve, but as she endures extreme effort and hurled-grabbed-pushed relationship, we see constant, determined joy. With superhuman control, Charlie Hodges catches wild, stumbling falls and whirring turns in deliberate shifts and composed stops. But when Hodges faces Eichten in a rare moment of quiet, the scale is only human; he gently settles her rumpled dress and rests a steady hand on her shoulder.

When Frances Chiavernini and Morgan Lugo meet, I forget to look for anyone else. Together, in some clear but irreducible combination of pulls and pushes, they launch her impossible length into flying turns that liquefy and then splatter – her hair and legs splashing out and spraying into the blackness. Their encounters end with a breezy backwards jog, arms linked and eyes glancing at each other in sweet, easy intimacy, until things fall apart. Soon twitches in her legs grow into convulsions that collapse her knees, and his hand caresses her head quietly, helplessly.

After Quintett, Cunningham’s Winterbranch (1964) is a dark space and a clearing out. With minimal movement, the dancers’ personalities and physical styles draw my eye through the darkness: Hodges’ explosive declarations, Eichten’s luxurious port de bras and spritely jumps. To audience members at the 1960s performances, the cacophonous score and often-motionless dancers suggested death and destruction. But this weekend we laughed out loud at the scurrying men who collected a dancer from one spot and deposited her in another before shuffling away. I think Cunningham, who reveled in the serendipitous effects of time and place on the perceived meaning of a dance, would have approved, and laughed.

We know Forsythe and Cunningham are tough acts to follow, but we can’t help but carry our impressions of the LADP dancers from those works into Millepied’s, and feel the contrast. Moving Parts is collaboration on a grand scale. At Disney Hall’s mighty organ, illuminated above the stage space, composer Nico Muhly sets a driving pace, while clarinetist Phil O’Connor and violinist Lisa Liu color the ambitious pulse with bright, hopeful tones. Below, Christopher Wool’s giant triptych – panels painted with densely layered numbers and letters and script – advances toward us, pulling us into a busy urban world. H HHodges’ sweeping gestures and cheerfully buoyant jumps make this city feel spacious, but then the panels box him in, shift and split – fracturing and destabilizing the space.

The regular, pulsing drive of Muhly’s score suggests a relentless, mechanical pace, but because the dancing mostly plods along with it, movement-for-note, the urgency fades and I find myself yearning for either more or less. It’s a relief and a thrill when the trio of women picks up Amanda Wells’ solo, amplifying her slicing turns into a spinning center of gravity.

Most compelling are moments when we see the dancers as the individual people we’ve come to know: Hodges’ oh-so-precise feet picking through a solo with pizzicato violin, a hippy conversation between Hodges and Wells, a torrent of tumbling gestures washing through Eichten’s body and sweeping her behind a panel. These bright spots are brilliant. But between them, without pulling at the music, the movement loses the humanity we’ve savored thus far, and the collaboration doesn’t seem fully realized.