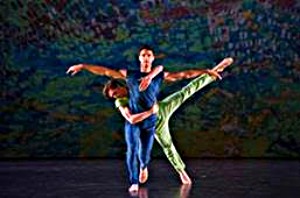 Though it spends much of its time on the road, the L.A. Dance Project stayed home for the Dec. 9-10 weekend and shared its latest batch of choreographies with local audiences at the Theater at the Ace Hotel downtown. This scrumptious, intricately restored Spanish Gothic-style theater was built in 1927 for silent movie stars Mary Pickford,  Douglas Fairbanks, Charlie Chaplin and D.W. Griffith. Now, it’s a 1,600-seat state-of-the art facility.

The company’s program included both world and West Coast premieres plus two pieces that demonstrate the ensemble’s breadth of repertoire. Directed by Benjamin Millepied, a one-time Paris Opera Ballet leader, a  former New York City Ballet dancer and the highly touted dance maker for the film, “The Black Swan,”  the group’s 12 performers and three live musicians entertained the crowd with their consummate command of their respective art forms.

This writer’s highlight was the West Coast premiere of the 42-minute “On the Other Side.” Created by  Millepied, the dance was performed in front of an abstract  backdrop of shades of red painted in swirling sponge-like shapes by Los Angeles-based  visual artist Mark Bradford. The sextet was accompanied by a suite of piano etudes composed by Philip Glass and played brilliantly onstage by Richard Valitutto. Almost literally, the work began with a physical interpretation of the composer’s style: glissandos of notes wrapping around an amicable melodic line. The dancers, in curving lines, sequentially rippled through circling arm phrases in simple locomotor processions. Establishing themselves as a community of movers, there were two powerful duets for same-gender couples. In the first, Morgan Lugo and Robbie Moore moved around, through, above and below each other, establishing a strong and supportive relationship. In the female duet, Stephanie Amurao and Julia Eichten demonstrated a similar connection. Both sections punctuated a seamless series of group activity. If the title refers to an afterlife, the choreographer seems to have some heavenly ideas about those new horizons.

At one point in “II Acts for the Blind,” Israeli dance maker Roy Assaf sets Rachelle Rafailedes seated on a chair at the side of the stage facing the audience. There, in a text created by the performers, she virtuosically lists, labels and orally parades through words, events and phrases that interpret some of the activity on the stage (“riding an upside-down bicycle in the air”) and describes our very own Los Angeles. The septet of movers are initially seen in beige box-like tops and bottoms (leggings and pants) and later in more vibrant, yet familiar street wear (shorts, T-shirts and the like), all designed by company member and former New York City Ballet Principal Dancer Janie Taylor. The movement phrasing is short and crisp, with long pauses as the full-bodied and sometimes heroic corporeal utterances travel across the stage from one dancer to the next. This choppiness is complemented by a spare piano and female voice song of longing composed by the Icelandic music group Rökkurró. Stylistically, a 180-degree departure from Millepied’s work, “II Acts for the Blind” brings a welcome expansion to the L.A. Dance Project repertory.

Engaging singer-songwriter (and other genre) music celebrity Rufus Wainwright to compose and perform for the world premiere duet, “Homecoming,” Millepied choreographed and took to the stage himself. Partnering the aforementioned Taylor, the two danced alone and together dressed in black (her costume designed by her; his designed by Berluti). Through elegant elongated body lines, sustained extensions and familiar interactions, the duo gently stepped and circled around and into each other. Having been previously exposed to Wainwright’s more conventional musical offerings, it was a thrill for this viewer to hear the occasionally discordant chord.

What was interesting to notice in Christopher Wheeldon’s duet, “After the Rain,” was that there were almost no steps that one could identify from any one dance idiom. Though this choreographer comes from a British ballet background, this pas de deux has been set on ballet and modern dance companies across the globe. Surrounded by an often-used Arvo Part selection (“Spiegel Im Spiegel”), the haunting aural environment allows for any number of interpretations. Though its male-female relationship is traditional, its refined presentation by LADP Associate Director Carla Körbes and visiting artist Batkhurel Bold allows the beauty of the inverted circling legs, arched spines and romantic lifts to comfort the viewer. The elegiac score was skillfully played live by Qiele Guo (cello) and Albert Cano Smit (piano) of the Colburn Conservatory of Music.

Along with those previously mentioned, Anthony Bryant, Aaron Carr, David Adrian Freeland, Jr., Charlie Hodges, Nathan Makalandra and Lilja Rúriksdóttir did fine work sharing their terpsichorean talents with the rapt audience. We can look forward to the next collection of concert dance makers this company brings to our local stages.