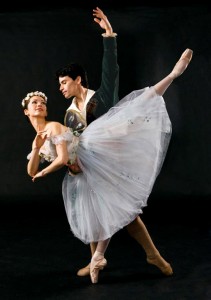 The Los Angeles Ballet continued its steady ascendance as LA’s own world-class professional ballet company, presenting the two-act tour de force story ballet “La Sylphide” in Redondo Beach, West LA, and Glendale during the month of May. Critically acclaimed for authentic renderings of a substantial number of George Balanchine’s works and an annual must-see “Nutcracker,” the 3-year-old company delivered a subtle, stylish performance of one of the world’s oldest surviving Romantic works.

“La Sylphide” tells the old Scottish tale of a forest fairy, the Sylph, who falls in love with a mortal named James, materializes before him on his wedding day, and seduces him away from his intended, Effie, into the woods to his ruin. Then, under a witch’s spell, James causes the death of his beloved fairy, and his abandoned bride marries his best friend Gurn.

The first act’s wedding scene was dazzling, courtesy of sumptuous period set and costumes on loan from Houston Ballet. The entire corps de ballet, including children’s corps, was featured in an extended rustic wedding dance, displaying the precision that distinguishes this company of 30 dancers. In the second act, the women’s corps presented a perfectly coordinated and truly magical dance of the forest sylphs.

Permanent Guest Artist Eddy Tovar brought fire and flight to the passionate Scottish man, James. He executed the classical pantomime with purpose and clarity, and seemed to hang in mid-air during a series of spectacular leaps. Tovar’s precision footwork and lightning turns took one’s breath away. He is surely a major star in the making. The radiant Corinna Gill danced the lovelorn sylph with ethereal lightness and grace. She seemed made of mist as she floated across the stage, and her incandescent smile was no less inspiring than her perfect ports des bras and marvelous extensions. A gifted actress as well, her final death scene was heartbreaking.

The crafty and evil enchantress, Madge, was played by Co-Artistic Director Colleen Neary with wit and star power. Grace McLaughlin was appealing as Effie, and Peter Snow offered a clean and powerful Gurn.

This most recent artistic success in a classic “white” ballet, for virtually sold-out houses, firmly establishes LAB as the completely credible and viable ballet company for which Los Angeles audiences have been waiting for decades.

Penny Orloff is a new contributor. She is an actor, musician, and playwright, and the author of the comic novel, JEWISH THIGHS ON BROADWAY, available on Amazon.com. She writes articles on music, theater, opera and dance for various print and web publications.