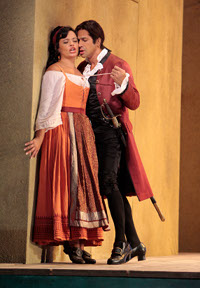 As one of the world’s best loved and most performed operas, there is no question that Mozart’s Don Giovanni is going to be enjoyable. Just how enjoyable is up to the production and the orchestra. LA Opera mostly delivers with its solid casting and James Conlon’s lambent orchestral performance, but I deduct some points for the rather uninspired staging.

Don Giovanni is what was called in its day a dramma giocoso — a jocular drama blending the serious with the comic. Even the overture states this theme with its ominous D-minor opening, leading to a spritely D Major allegro. Yet, apart from the first 10 minutes and the last 10 minutes, you’d think you were there solely to enjoy the amorous and entertaining exploits of the legendary lover Don Juan. However, we understand by the end that the whole thing is a morality play, with crime followed inevitably by divine retribution, harshly delivered. Mozart’s purpose is evident in the complete title of the 1787 opera: The Rake Punished or Don Giovanni. I suppose today’s younger generation can think of it as an Enlightenment version of “Bully Beatdown.”

As a character, Don Giovanni is wonderfully ambiguous and therein lies much of the genius of the opera. It is hard to know if one ought to think of him as a malicious reprobate or a valiant, if incorrigible, rogue. In crafting this role, the actor must show us a man who is genuinely charming and likeable, while at the same time, dangerous and dissolute. LA Opera has found an excellent interpreter in Ildebrando D’Arcangelo (I give the man a certain amount of credit for his name alone!). He is macho, dark, dangerous and smoldering, with a strong, commanding baritone. While possessing the right stuff to set ladies’ hearts aflutter, D’Arcangelo also projects a sense of courageousness and good humor that place him far beyond a mere cardboard-cutout villain.

Don Giovanni’s nebulousness acts in some ways like a mirror, held up to reveal the foibles of all around him, and the best actors take advantage of this, especially in a humorous way. David Bizic as Leporello, Don Juan’s bumbling and fearful servant, provides numerous moments of laugh-out-loud comic relief. Soile Isokoski as Donna Elvira shows another side of human weakness in her pathetic desperation to secure the romantic attention of Don Giovanni. For sheer vocal chops, however, the duo of Don Ottavio (Andrej Dunaev) with his Caruso-esque tenor and his paramour Donna Anna (Julianna Di Giacomo) impressed the most.

One would not call this a “modern” version of the opera: the actors are properly dressed in the classic capes and tricorn hats of the late 18th century. The principal actors stand out from the peasants by contrast of colorful versus monotone costumes. But the sets are disappointingly blank in that modernistic kind of fashion. For much of the opera, we are looking at the flat planes of geometry: building walls with no visible doors, windows, or other ornamentation, and a large featureless blue rear wall. What should be the splendor of Don Giovanni’s palace instead looks like a warehouse with a table stuck in the middle. With the exception of the graveyard scene with its dramatic blue lighting, the staging is somewhat flat as well. For an example of how exciting the sets and staging can be, check out YouTube for a look at Franco Zeffirelli’s sets for the 1990 Metropolitan Opera production, or a clip from the 1984 movie Amadeus to see how they staged the final feast scene.

Nevertheless, the climactic scene at the end of Act II where the animated statue of the murdered commander arrives at Don Giovanni’s dining hall to exact his retribution remains a riveting scene, one of the most exciting in all of opera. When the floor around the table opens up and Don Giovanni is dragged down screaming into the flames of hell, the inner critic becomes silent and you immerse yourself into the sheer spectacle of the scene.

Through it all, we are treated to the sumptuous strains of Mozartean melody at its best. The distinctive combination of horn, clarinet, flute, and oboe against violin coalesces into compelling music that brilliantly mirrors the action on stage. It’s lovely to listen to in its own right, but dig a little deeper and you can begin to uncover all sorts of clever musical asides that Mozart has added. In one feast scene, a band of musicians appear onstage to play for Don Giovanni. Contemporary tunes from operas such as Una Cosa Rara by Martin y Soler (this opera introduced the waltz to Vienna) and Fra I Due Litiganti by Sarti precede a snatch of Mozart quoting himself from his earlier opera, Figaro. These songs foreshadow Don Giovanni’s fate while at the same time are all “in jokes” making references to current culture that most Viennese would have understood. Such layered meanings reward the opera lover’s in-depth study but take nothing away from the accessibility and enjoyment of the music, which conductor James Conlon delivers with unerring skill.